Gov’t to Anticipate This Year’s Mudik 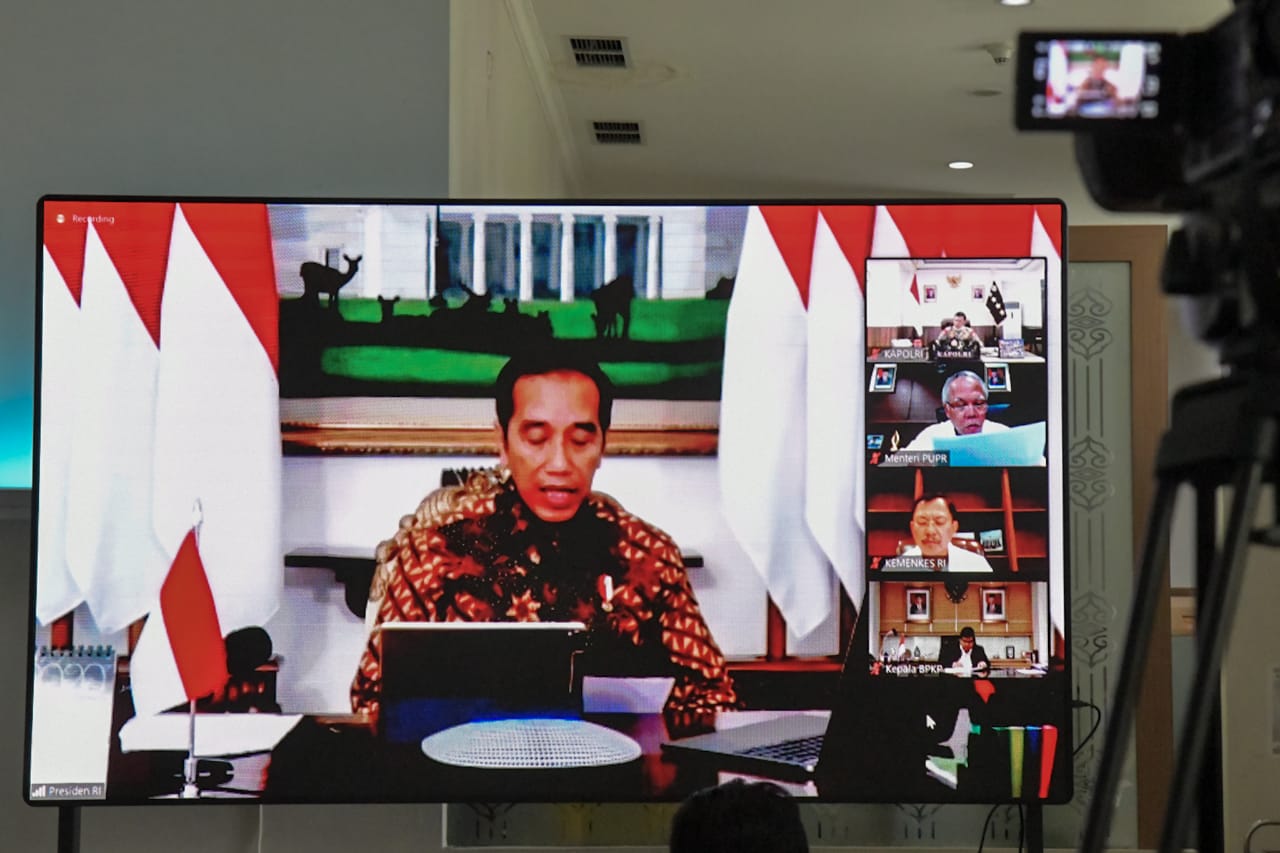 President Jokowi delivers his remarks at a Limited Cabinet Meeting through video conference on the Anticipation of Eid-al-Fitr Mudik, from the Bogor Presidential Palace, West Java Province, Monday (30/3). (Photo by: PR/ Ibrahim).

Mudik (annual exodus ahead of the Eid-al-Fitr) tradition involves amassive mobility. As an illustration, last year there were mobilities of approximately 19.5 million people to all regions across the country, President Joko “Jokowi” Widodo has said.

The President further said that since the announcement of emergency response status in Jakarta , a number of people start their mudik earlier, especially informal workers in Greater Jakarta (Jabodetabek) heading to West Java, Central Java, and Yogyakarta Special Region (DIY) as well as East Java Provinces,” President Jokowi said in his introductory remarks at a Limited Cabinet Meeting through a video conference on the Anticipation of Eid-al-Fitr Mudik, from the Bogor Presidential Palace, West Java Province,  Monday (30/3).

The President went on to say that the mobility of people at the current magnitude will lead to a great risk of expanding the spread of COVID-19.

Therefore, the President gave his directives on the anticipation of this year’s mudik:

First, the Government will focus on preventing the spread of COVID-19 by reducing or limiting the movement of people from one place to another.

Second, the Government will take stringent measures to prevent the movement of people to the regions for the sake of mutual safety.

“I notice that there have been appeals from community leaders and governors to migrants living in Greater Jakarta not to return home and I ask this measure to be continued and be more intensified in order to break the chain of COVID-19 spread,” the President said.

Third, the President said that he noticed that the annual exodus comes earlier because the income of most informal workers has declined dramatically or even vanished.

“The workers have no income at all due to the implementation of emergency response policies, namely, working from home, studying from home, and worshipping at home,” the President said.

Therefore, the President ordered the acceleration of social safety net program. This program, that provides social protection for informal sector and daily workers, as well as economic incentives for micro-and small businesses, must be immediately implemented on the ground.

“The social safety net program is expected to be able to fulfill basic daily needs of informal workers, day laborers, and hawkers,” the President added.

Fourth, the President also ordered Governors, Regents, and Mayors to boost their supervision on the people who have already returned home.

“I have received reports from Governor of Central Java, Governor of DIY, that their provinces have implemented strict health protocols, both in villages and urban villages for travelers. I think this is also a good initiative,” President Jokowi said, adding that it is should be carried out in a measured way.

On that occasion, the President requested to apply health protocols properly for travelers who have already returned home.

“Do ensure that the health of the travelers will really bring safety for residents in the villages,” President Jokowi added.

For the record, there have been 876 interprovincial buses carrying approximately 14,000 passengers from Greater Jakarta to West Java, Central Java, East Java, and DIY over the past eight days.

“The number for the flow of early annual exodus using other mass transportation has not been included yet, including trains or ships, and air transportation, as well as those using private cars,” the President said at the end of his remarks. (TGH / EN)