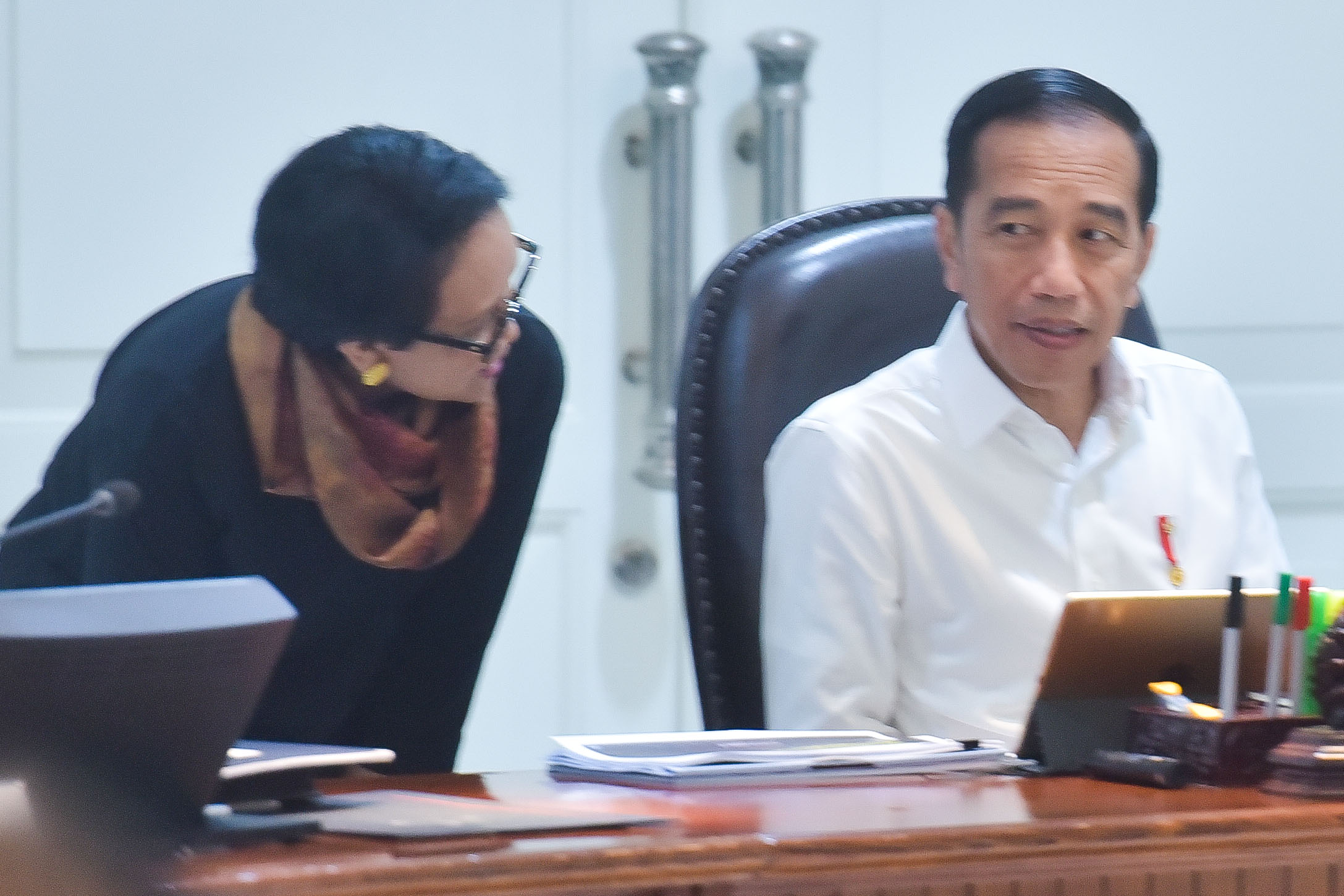 President Jokowi listens to reports from Foreign Affairs Minister Retno Marsudi before a limited meeting on Accelerated Implementation of Industry and Trade Program, at the Presidential Office, Jakarta, Wednesday (11/12).

President Joko “Jokowi” Widodo has called for investment opportunities in import-substitution industries to be wide open due to large contribution of raw/auxiliary material import to the country’s trade balance deficit.

“It means that steel industry, chemical industry or petrochemical industry must really be opened (for investment) because this is a trap of import substitution,” President Jokowi said during his remarks at the limited meeting on Accelerated Implementation of Industry and Trade Program, at Presidential Office, Jakarta, Wednesday (11/12).

The President also called on the Investment Coordinating Board (BKPM) and Coordinating Minister for Maritime Affairs and Investment to formulate concrete quick win steps to encourage the growth of the processing industry such as the steel industry and the petrochemical industry, as well as the acceleration of B30 (30 percent blended biodiesel) mandatory policy to reduce fuel imports.

“I heard from Minister of SOEs that this month we can start the (mandatory) B30 (program). The growth of the processing industry will not only produce imported substitute goods but will also provide added value, namely job opportunities. This is what we are after: to open job vacancies,” the President said.

Earlier in his remarks, President Jokowi stated that the Government in the future will focus on maintaining economic growth in order to remain positive as well as reducing the current account deficit, while at the same time increasing the trade balance surplus.

Therefore, the President continued, the Government must focus on breakthrough action plans to reduce import figures.

The Head of State also stated that according to data of Central Statistics Agency (BPS),  raw/auxiliary materials account for 74.06% of total imports from January to October 2019, while capital goods and consumer goods import made up to 16.65% and 9.29 %, respectively.

On that occasion, the President also reminded his Cabinet ministers about the acceleration of negotiations for comprehensive economic partnership agreements (CEPA), especially for potential countries.

“To Minister of Trade, Minister of Foreign Affairs, if really necessary, do pursue the potential countries we do not have a partnership agreement yet,” he said.

President Jokowi also stated that Indonesia already has a trade agreement with Australia, but the Government still needs to work on trade agreements with the EU, ASEAN countries, RCEP members, and African countries.

“All of this must be accelerated. The negotiating team must also be really capable and continuously negotiate so that the opportunity to export products from our country to other countries can be wide open. This is what we must map. We must also encourage exporters to carry out a maximum performance,” the President said.

President Jokowi also reiterated the importance of cutting various regulations that hamper exports. improving access to export financing, improving the quality of export products, both in terms of packaging, branding, and others, as well as preparing export-oriented industrial areas that are truly integrated. (HIM/SM/RAH/ES)