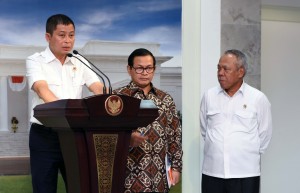 Minister of Transportation, accompanied by Cabinet Secretary Pramono Anung and Minister of Public Works and Public Housing Basuki Hadimuljono, delivers a press statement after a limited meeting, on Monday (2/5), at the Presidential Office, Jakarta

The Government has agreed to build one major port on the northern coast of West Java.

One of the options for the location is in Patimban area, Subang Regency, which will replace the previously planned Cilamaya Port that has the potential to disrupt the infrastructure of oil, gas, and others.

Minister of Transportation Ignasius Jonan said that the port that is planned to be constructed in Patimban has an initial container capacity of 7.5 million twenty-foot equivalent units (TEUs) and can accommodate 250,000 cars.

Thus, there will be a car terminal with the capacity four times larger than containers. Unlike container, cars cannot be stacked, Jonan said to the reporters on Monday (2/5) at the Presidential Office, Jakarta.

Jonan also said that once the construction plan of Patimban Port is approved, it will use a funding mechanism among the regional governments.

Cabinet Secretary Pramono has mentioned that it is important for the port to have capability of accommodating 250,000 cars as well as have a capacity of 1.5 million TEUs in the first phase of construction from the planned 7.5 million TEUs, Jonan explained.

Jonan also said that the most important point is that the Government also promotes exports.

Jonan added that currently large complex of industrialization in West Java was established, but the port is not enough to accommodate it even when Tanjong Priok Port has been expanded.

Thus, asked whether the planned port will be compete with Tanjung Priok Port, Jonan answered that they will indeed compete with each other in business sector.

However, the capacity will continue to expand. I believe, for the Jabodetabek and their surrounding areas, they will choose Tanjung Priok Port. Meanwhile, for Karawang, Cikarang and other areas in West Java will choose the planned port, Jonan said.

Responding to reporters questions, Jonan said that although there is the possibility of a loan from Japan with 0.01 percent interest rate, Patimban Port would still be a state-owned port.

According to Jonan, the project cost is still under calculation, while, the total investment is Rp40 trillion.

It depends on the exchange rate because we cannot produce all instruments in the country, Jonan said.

Meanwhile, Cabinet Secretary Pramono Anung admitted that the project of Patimban Port is not included in the Presidential Regulation on strategic projects planning.

However, Pramono said that the President in a meeting has instructed Minister of Transportation to negotiate with related parties in order to obtain favorable outcome for the country.

The negotiation needs to be conducted and the President instructed me to prepare the Presidential Regulation once the negotiation runs well, Pramono said while reminding all that President Jokowi is planned to conduct a working visit to Japan on 26 to 27 May 2016.

The President is also scheduled to visit South Korea and Russia on 16 to 20 May to participate in an Asian-Russian Summit, Pramono added. (FID/DND/ES) (RAS/EP/YM/Naster)