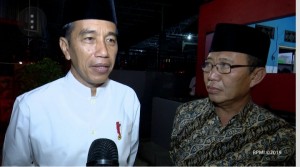 In a bid to reduce dependence on imported oil products and provide as many jobs as possible, the Indonesian Government has planned to invest in oil refineries development and upgrading in numerous regions in the country.

By developing oil refineries, we aim to provide as many jobs as possible and at the same time it will certainly boost the regional economy, President Jokowi told reporters in Tuban, East Java, Friday (1/2).

The investment in oil refinery, according to the President, is planned to be constructed in numerous areas, namely Tuban, Balikpapan, Bontang, Cilacap and Balongan. Specifically for Tuban, the construction will involve state-owned oil and gas company PT Pertamina and a Russian oil company Rosneft.

We want to have our own oil refinery which is very much needed to meet the needs of domestic fuel demand so that it will increase Indonesia’s independence and energy sovereignty, President Jokowi said.

Responding to the resistance of some residents living near the Tuban oil refinery construction site, the President allowed them to convey their aspirations to their Regent and the Governor.

For the record, Tuban oil refinery will have a production capacity of 300 thousand barrels per day. The oil refinery is expected to increase fuel supply in the country to reduce fuel imports. (BPMI Setpres/ES)