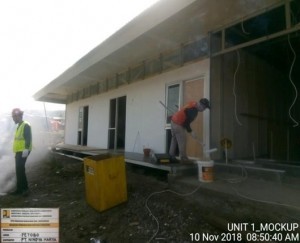 Temporary shelters built by the Government for Palu and Donggala quake victims. (Photo: Ministry of Public Works and Public Housing)

The Indonesian Government continues to take various efforts to recover the damages caused by earthquake, tsunami and liquefaction that occurred in a number of areas in Central Sulawesi Province last September.

Ministry of Public Works and Public Housing (PUPR) will build 1,200 temporary shelters (Huntara) in Palu City, Sigi Regency and Donggala City. Of the 1,200 units, 116 units have completed and are ready to be occupied starting in mid-December 2018.

Vice President Jusuf Kalla on Sunday (11/11) paid a visit to observe the locations of earthquake victims in Mpanau Village, Sigi Regency and Petobo Village, Palu City, Central Sulawesi, as well as to ensure the progress of the shelters construction.

Furthermore, the Vice President requested to accelerate the construction so that they will be ready to be occupied by the end of December 2018.

Minister of PUPR Basuki Hadimuljono said that in order to accelerate the construction of the shelters, every state-owned construction companywill add the working time implementing a shift system. The number of shelters to be built will follow the increasing number of refugees.

Every shelter costs around Rp 500 million and equipped with 4 toilets, 4 bathrooms, septic tanks, laundry rooms, a kitchen and 450 watts of electricity for each room. Electricity installation and payment will be handled by Ministry of Energy and Mineral Resources and state-owned electricity company PLN, he said.

The Chairperson of the Central Sulawesi Disaster Management Task Force of Ministry of PUPR, Arie Setiadi Moerwanto, said that from 1,200 shelters planned, the locations are scattered in 48 points, namely 9 locations in Donggala, 21 locations in Palu, and 18 locations in Sigi. From that amount, 506 shelter plans have been measured for layout and 116 units will be completed soon. So, from overall target of 1,200 units, the physical progress is 19.27%.

In addition, the shelters will be built adopting a cluster system in five zones by considering the land availability and location security from possible earthquake in the future. Each cluster consists of 10 shelters (120 rooms) that are quake resistant and equipped with one early childhood education (PAUD), one elementary school, a dumping ground, an open space for community activities, and a motorcycle parking lot. We build it as comfortable as possible because it is going to be used for a long period of time, approximately 1 to 2 years until the permanent housing is completed, Arie said.

Ministry of PUPR is also currently repairing the damage of Drinking Water Supply Systems (SPAM) in 12 locations spreading across Palu, Donggala and Sigi. Of the 12 locations, the Salena IPA SPAM in Palu City has completely repaired, while Duyu I SPAM (Gawalise) with a service of 20 liters / second still at 50% progress.