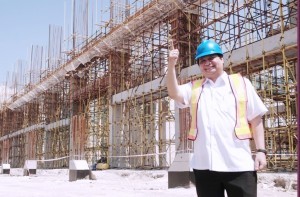 The Indonesian Government is determined to continue accelerating development of industrial estates outside Java in order to boost infrastructure development and create economic equality in the country.

The Government has also set the target of operating 18 industrial estates outside Java next year.

As many as 8 out of 18 industrial estates are currently under construction, namely Lhoukseumawe, Ladong, Medan, Tanjung Buton, Landak, Maloy, Tanah Kuning, and Bitung, and the remaining 10 are still in the planning stage, including Kuala Tanjung, Kemingking, Tanjung Api-api, Gandus, Tanjung Jabung, Tanggamus, Batulicin, Jorong, Buli and Bintuni Bay.

Until November 2018, 10 industrial estates listed on the National Strategic Projects (PSN) have been operating, said Minister of Industry Airlangga Hartarto in Jakarta, Monday (17/12).

Under Presidential Regulation Number 58 of 2017 on the Acceleration of the PSN Implementation, 23 industrial estates are stipulated as the PSN. The development of industrial estates constitutes the Governments top priority to materialize an inclusive economy, said Airlangga.

We project that there will be a 60 percent increase in the contribution of non-oil and gas processing industries outside Java compared to those in Java, he added.

Sei Mangkei and Kuala Tanjung industrial estates, for example, are designated to become a cluster for the development of agro-and-aluminum based industries because state mining holding company Inalum and CPO processing industry are located there, Airlangga said.

The Minister added that measures are also being taken to spur downstream industry. Inalum has produced aluminum alloy that can be used by the automotive sector for engine blocks, he said.

The Minister maintained that the development of downstream industry is aimed at increasing the value added of domestic raw materials so that they can substitute imported products, increase foreign exchange earnings from export proceeds, complete supply chain of manufacturing in Indonesia, as well as strengthen Indonesias industrial structure.

Airlangga also expressed optimism that the development of industrial estates will increase the value of investment in Indonesia. In reality, the establishment of factories will provide many job opportunities for the locals. This is one proof of the multiplier effect of industrialization activities, he explained.

Minister Airlangga also cited an example of Cilegon cluster that has already attracted several additional investors such as Posco and Krakatau Steel with the investment value amounting to USD3 billion. Lotte Group has also recently conducted a groundbreaking of USD3.5 billion at Cilegon cluster.

(These new investments) are expected to boost the confidence of other investors because it is conducted ahead of the political year, meaning that investors no longer need to wait because Indonesias economic and political conditions are considered stable, Airlangga concluded. (Public Relations Ministry of Industry/ES)