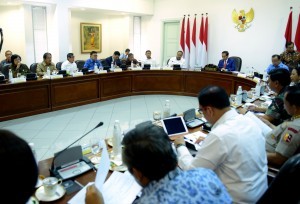 President Jokowi leads the Limited Cabinet Meeting on the Acceleration of Divestment of PT Freeport Indonesia, at the Presidential Office, Jakarta, Thursday (29/11). (Photo by: Rahmat/Public Relations)

President Joko Jokowi Widodo said that he had received a report that several matters related to the process of 51-percent divestment of PT Freeport Indonesia’s shares had been completed.

There are several advanced stages that still need a solution that needs to be accelerated, President Jokowi said in his remarks at the Limited Cabinet Meeting on the Acceleration of Divestment of PT Freeport Indonesia, at the Presidential Office, Jakarta, Thursday (29/11).

In September, the Divestment Agreement, Sales and Purchase Agreement and Subscription Agreement were signed in order to complete the divestment process. To that end, the President ordered the related ministries/institutions to submit a report on the development of several issues that still need to be resolved immediately, such as environmental issues, waste issues and tailings problems.

In addition, the issues of work contract changes into special mining permit (IUPK), the share handover to the Papua provincial government and Mimika regency, as well as issues related to fiscal guarantees, taxation, royalties, and investment stability need to be resolved immediately.

I expect that the whole divestment process could be completed before the end of 2018, the President.

The President stressed that the divestment process is a big step to restore the majority of ownership of very strategic natural resources to Indonesia.

We will use it as much as possible to improve the welfare and prosperity of the Indonesian people, especially the Papuan people,” President Jokowi continued.