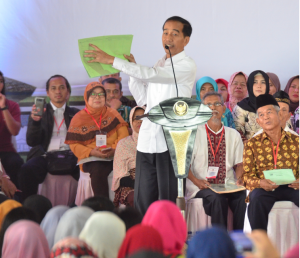 As part of the working visit in Banten, President Joko Jokowi Widodo on Friday (25/1) at the Army Aviation Center distributed 40,172 land certificates to residents in South Tangerang City, Banten province.

In his remarks, President Jokowi said that the certificate is needed as a proof of legal rights to land ownership yet there are many people still do not have the certificates.

According to the President, the issuance acceleration is carried out to avoid more land conflicts throughout the nation. He also aims that in 2025 all lands will have been certified.

President Jokowi also reminded the residents who have received the certificates to make a copy of it and secure them inside a plastic folder so the water cannot damage it. He also suggested storing the copy and the original separately in order to avoid loss.

Previously, Minister of BPN Sofyan Djalil reported that 40,172 certificates were distributed today and 23,000 people were present at the venue. This year, in accordance with the President’s orders, God willing, we will finish the issuance of land certificates in South Tangerang City, Sofyan said. (DND/DNS/ES)