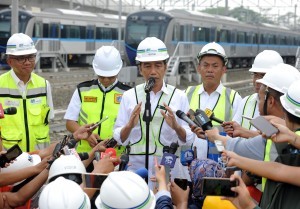 I expect the east and west parts will be parallelly constructed by 2019. I have ordered Governor of Jakarta and Minister of Transportation to draw up a plan and get approval from the Jakarta Regional Representative Council (DPRD), President Jokowi told reporters at the Lebak Bulus Depot, Jakarta, Tuesday (6/11).

According to the President, the MRT, which runs at a speed of 60 km/h, is comfortable and soundproof. We expect the MRT will fully operate in March 2019 at the latest, the President added.

The MRT stops here and its maintenance is also performed at this depot. There is also a main control station at a building next to this depot, President Jokowi said.

So far, the President assessed the synergy between the Central Government and the provincial government in realizing the presence of the MRT in Jakarta goes very well.

Regarding the impact of the operation of the MRT to reduce traffic congestion, President Jokowi reminded that there must be an integrated flow between MRT, LRT (Light Rail Transit), airport trains, TransJakarta buses, Kopaja (Jakartas medium-sized buses), and angkot (public minivans).

In addition, it will also reduce the use of private cars in Jadebotabek (Jakarta, Bogor, Depok, Tangerang, and Bekasi) area. If the electronic road pricing (ERP) policy has been implemented, it will also give an impact, the President concluded, adding that the MRT tariff plan (ranged from Rp8,000 to Rp9,000) is expected to make local residents interested in using this citys newest mode of transportation. (FID/JAY/ES)