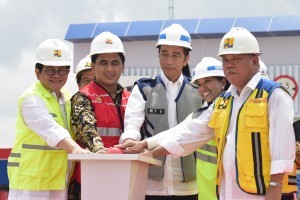 President Joko Jokowi Widodo is optimistic that the toll road from Merak, Banten Province, to Surabaya, East Java Province will be connected in mid-December 2018.

Later, if Surabaya-Probolinggo toll road is already connected, we will continue the work to Banyuwangi. God willing, it will be completed at the end of 2019. It means that from the west side of Java Island to the east side will be connected, President Jokowi told reporters after inaugurating Pejagan-Pemalang Toll Road (section 3 and 4 East Brebes-Sewaka) and Pemalang-Batang Toll Road (Sewaka-Pemalang Interchange) at the Tegal Timur Toll Gate, Tegal, Central Java, Friday (9/11) afternoon.

After the west end and the east end of Java Island are connected, President Jokowi said that the Government will concentrate on completing toll road construction in Sumatra, Kalimantan and others.

On the completion of the toll road construction, President Jokowi said that he have ordered Minister of State-owned Enterprises, Minister of Public Works and Public Housing, and Mayors/Regents whose areas are crossed by the toll roads to construct rest areas which sell the local featured products and foods.

It can be salted eggs, Tegals signature satay, or red onion, the President said, adding that the Government will draw up the mechanism to facilitate that matters.

Unlike the old-fashioned rest areas that mostly sell imported products, President Jokowi expressed his hope that the new rest areas around there will market authentic Indonesian products, especially local/regional products. International/imported brands are still allowed, according to him, but not too dominant.