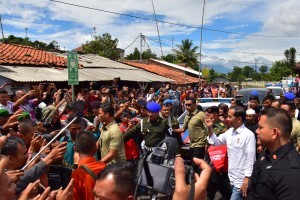 In a bid to disentangle traffic jams which often happened in Garut and Tasikmalaya, West Java Province, towards Cileunyi Toll Road, the Government had decided to construct Cigatas (Cileunyi-Garut-Tasikmalaya) Toll road this year.

This is a gift for the beloved people of Garut and Tasikmalaya, President Joko Jokowi Widodo said at the Land Certificate Distribution to the Islamic Institutions at the Cibatu Grand Mosque, Garut, Friday (18/1).

When it (the Toll Road) is ready to operate, vehicles that are heading to Bandung or other Southern regions (of West Java Province) can use the Toll Road, Sugiyartanto said at Jakarta, Wednesday (16/1).

According to Sugiyartanto, Cigatas Toll Road will be an alternative road besides Purwakarta-Bandung-Cileunyi Toll Road.

Currently, Sugiyartarto continued, the Toll Road project is entering the location determination phase. The phase will be carried out by Directorate General of Road Development of the Ministry of Public Works and Public Housing to be immediately submitted to West Java Provincial Government.

We still prepare the route design of the toll road up towards Cilacap, Sugiyartanto said as quoted on the Ministrys official page www.pu.go.id.