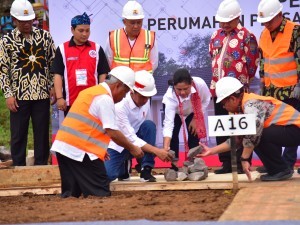 In his remarks, the President said that at the groundbreaking location, 500 housing units would be constructed and on the first phase, the Government will construct100 housing units.

This is a government program with subsidies of Rp135 million with installments of Rp.800,000 (per month), he said.

The housing constructions, according to the President, are a joint program of FLPP (Housing Financing Liquidity Facility) of Ministry of Public Works and Public Housing and state-owned bank BTN (Bank Tabungan Negara). On the price component of the house, the Government provided subsidy Rp4 million for down payment and 5 percent interest rate subsidy, he said.

According to President Jokowi, the construction of community housing will also be carried out in other provinces for different communities.