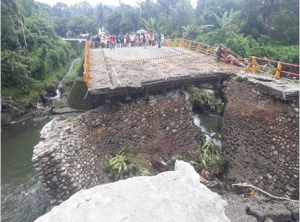 Through his Facebook account that was uploaded a few hours ago, President Jokowi said that the bridge which connecting Padang to Bukittinggi was so important because the road was a strategic route and one of veins of West Sumatra economy.

This (bridge) is the tourism route to Bukittinggi, Batusangkar, Payakumbuh, and 50 Kota, also transportation routes to Riau Province and several other districts, as well as being a food distribution and logistics line, President Jokowi wrote.

Therefore, the President continued, Ministry of Public Works and Public Housing immediately built a temporary bridge to reopen the route. The steel frame bridge is being assembled along 36 meters and is targeted to be completed within this week, he said.

If the temporary bridge is finished, President Jokowi ensures that the Government immediately prepares a permanent bridge design.

After going through the tender process, hopefully the construction will begin in March 2019, and will be completed in September or October 2019, the President concluded. (ES)