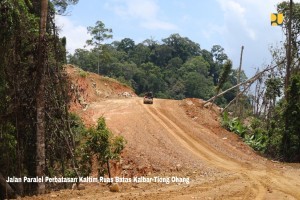 The Government, through Ministry of Public Works and Public Housing, continues to develop infrastructure near state border areas in Kalimantan, Papua, and East Nusa Tenggara. This is in line with the realization of President Joko Jokowi Widodo and Vice President Jusuf Kallas Nawa Cita (nine priority programs) and these projects is intended to open isolated areas and equitable distribution of development results.

On Kalimantan Island, the parallel road borders construction is targeted to be done by the end of 2019. In addition, three cross-border posts (PLBN) will be built, namely Jagoi Babang PLBN, in Bengkayang Regency, West Kalimantan Province, as well as Sei Pancang PLBN and Long Midang or Kraya PLBN in the Nunukan Regency, North Kalimantan Province.

The PLBN development is not only as an entry gate, but is also as an embryo of center of regional economic growth that can improve the welfare of border residents, Minister of Public Works and Public Housing Basuki Hadimuljono said.

From 1,068-kilometer border roads in both of East and North Kalimantan Provinces, currently there are 185 kilometer unpenetrated roads, namely 126 kilometers in North Kalimantan and 59 kilometers in East Kalimantan. We targeted it to be connected and functional by the end of 2019 with partial asphalt conditions, some aggregate pavement with ground pavement, Refly said.

One of the parallel road borders of East Kalimantan that is currently being worked on is the West Kalimantan-Tiong Ohang section that spans along 15 km and was assisted by Indonesian Armys Engineering Directorate (Zeni TNI-AD) in land clearing and already penetrated completely in the form of a dirt road.

In this section, the Ministry is building a duplicate suspension bridge with a 120-meter span that connects Tiong Ohang Village and Long Krioq in Long Apari Sub-district which is separated by Mahakam River and most of its material must be imported from Jakarta, which becomes the biggest challenge of the construction.

This road section is one of the six projects of border roads construction in East Kalimantan and North Kalimantan which stretches for 132 kilometers worth Rp330.72 billion and the contracts were signed in January 2018.

Deputy Regent of Mahakam Ulu Yohanes Juan Jenau in his office said that the construction of parallel road borders would reduce the cost of goods and services, and open the land access for Mahakam Ulu residents who had been relying on boats until now as the main transportation.