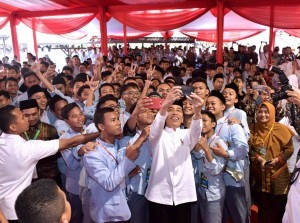 President Jokowi takes selfie with students during the commemoration of the 100th Anniversary of Madrasah Mu’allimin-Mu’allimaat Muhammadiyah in Yogyakarta, Thursday (6/12). Photo by: Presidential Secretariat.

The Government will continue the infrastructure development in Papua despite recent violence perpetrated by armed groups, according to President Joko Jokowi Widodo.

“The Government will continue to develop Papua. We know that (all regions in Indonesia) from Sabang to Merauke, from Miangas to Rote Island need infrastructure, President Jokowi said during the commemoration of the 100th Anniversary of Madrasah Mu’allimin-Mu’allimaat Muhammadiyah in Yogyakarta, Thursday (6/12).

The President explained that the absence of reliable infrastructure in Papua has caused long travel times. Not infrequently, a trip that normally takes just a few hours will take several days to complete.

“There are many damaged roads in the eastern part of Indonesia, in Papua, where you have to spend two or three days for a 120-kilometer trip,” President Jokowi said.

President Jokowi went on to say that the equal infrastructure development in Indonesia is important for inter-region connectivity as well as for upholding the spirit of unity of the nation.

“Developing infrastructure is not only about economy, but also a matter of the unity of Indonesia as a great nation,” President Jokowi said, adding that the infrastructure development also helps the Indonesian people to know more about their fellow countrymen.

Also present during the event were, among others, Minister of State Secretary Pratikno, Minister of State-Owned Enterprises Rini Soemarno, Minister of Education and Culture Muhadjir Effendy, member of the Agency for the Implementation of the State Ideology of Pancasila (BPIP) Steering Committee Syafii Maarif, Governor of Yogyakarta Sri Sultan Hamengku Buwono X, and Chairman of Muhammadiyah Haedar Nashir. (BPMI Setpres/ES)