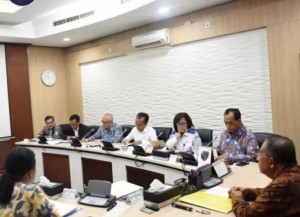 The Indonesian Government has decided to lower price ceiling for domestic airfare by 12-16% which will be effective from 15 May for Java routes as well as for flights to Jayapura.

The Government, Darmin added, has noticed an airfare surge among domestic airline companies since the end of December 2018 and the airfare has not dropped after 10 January 2019. The impact of airfare hike will affect the people, especially before the Eid homecoming season, he stated.

The Minister also said that the price ceiling for domestic airfare regulated in the Decree of Minister of Transportation Number 72 of 2019 has not changed significantly since 2014 and was suspected to be one of the reasons for high airfare.

According to Darmin, another factor to be calculated is aircraft fuel price increase. At the end of December 2018, aircraft fuel prices reached US$86.29 a barrel, the highest since December 2014, resulting in an increase in the operational expenses of airline companies so that they needed to be compensated by rising airfare.

“The decision to cut the price ceiling will be effective after the signing of Minister of Transportation Regulation on the expected date of May 15, 2019. This decision will be continuously evaluated based on applicable regulations to maintain airfare for domestic flights by considering a balance between consumer protection and business continuity,” Darmin said.

Darmin further said that collaboration between Ministries/Agencies and related business entities is needed for regular basis evaluation of the national aviation industry so potential problems or issues can always be identified earlier. “Thus, the aviation industry, especially air passenger services, can perform better and be more stable,” he said. (Coordinating Ministry for the Economy PR/ES)