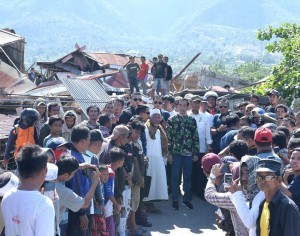 In a bid to ease the distribution of clean water and food aid for residents affected by the quake and the tsunami in Palu and Donggala, Central Sulawesi, the Government will deploy special airplanes.

It is because Palu airport has not operated yet, President Jokowi told reporters after inspecting Talise Beach in Palu, on Sunday (30/9).

The President explained that Mutiara Sis Al Jufri Airport in Palu is damaged and the runway cannot be landed in; thus, the Government will deploy special airplanes to send food and water to the affected residents.

President Jokowi also stressed the Governments commitment to rebuild damaged public facilities and ensured that reconstruction and rehabilitation process will begin after the evacuation process. The Government will repair facilities damaged including collapsed bridges, hospitals, airports, and school buildings, the President said.  (BPMI Secretariat of the President /ES)(RAS/EP/Naster)