Govt to Discharge 2,357 Civil Servants Involved in Corruption by End of 2018 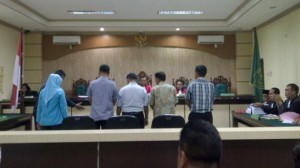 Based on civil servant data collection (PUPNS) compiled by the National Civil Service Agency (BKN) in 2015, it is recorded that appoximately 97,000 civil servants did not update their data nor re-registrate.

After further investigation, the Head of Public Relations Division of the BKN Mohammad Ridwan said that one of the reasons is because they are sentenced to imprisonment as they are convicts in corruption case.

Following verification and validation of the data of civil servants involved in corruption case with an  inkracht (a final and binding court ruling) status, it is noted that 317 out of 2,674 civil servants are dishonorably discharged from their positions, while the remaining 2,357 are still recorded as active civil servants, Ridwan said in a press release on Tuesday (4/9).

Regarding that matter, Ridwan explained that according to Article 49 of Law Number 5 of 2014 on State Civil Apparatus, the BKN has an authority to block civil servants data on the national civil service database in order to minimize the potential loss of state finances.

Therefore, the BKN is ready to assist government institutions that intend to verify and validate civil servants with an inkracht status in corruption case.

BKN expects this matter can be solved by the end of 2018, Ridwan firmly said.