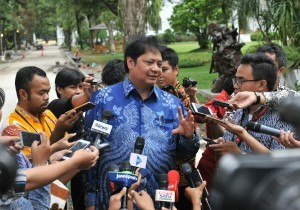 Minister of Industry responds to reporters questions after a Limited Meeting at the Merdeka Palace Jakarta, on Friday (5/1)

The Government to conduct a roadshow to disseminate regulations in Indonesia that have been improved, to investors and rating agencies in order to create a better investment climate. The statement was made by Minister of Industry Airlangga Hartarto after attending a Limited Meeting at the Merdeka Palace, Jakarta, on Friday (5/1).

The Minister explained that several industries have grown above the economic growth, such as foods and beverages, chemical industry, downstream steel industry, pulp and paper, and part of jewelry industry.

For the development of industrial areas, the investment target in that areas must be exceeding Rp250 trillion, while the outlooks target is around Rp 325 trillion, Airlangga added.

The Minister also said that the Government is now implementing some measures in order to increase industrial competence. The first one is by increasing incentives for vocational sector. As I said earlier, the Ministry of Industry has informed the Ministry of Finance that there are 10 policy packages related to investment, innovation, vocation, including development of automotive industry, the Minister added.

According to Airlangga, for research and development (R&D), Indonesia, like any other countries, has provided a benchmark with Thailand and other countries that give 300 percent tax allowance. The Minister also added that his office has delivered that information to the Ministry of Finance so Indonesia can be at the same position as other ASEAN countries.

Regarding tax allowance for vocation, the allocation is also 200 percent. President Jokowi has previously asserted that after infrastructures, (the Government) will concentrate on human resources including reallocating budget to ministries which implement vocational development, the Minister said adding that budget reallocation can be provided to Ministry of Manpower or Ministry of Industry.

The coordination to be done once every four months if investors deemed it is necessary. In the meantime, the roadshow will be managed by Coordinating Minister for the Economy .

Periodically, it will be conducted once every four months, and will be managed by the Coordinating Minister, Airlangga said adding that the President also instructed Coordinating Minister for Maritime Affairs to evaluate tax allowance.  (FID/DNS/EN) (RAS/MMB/YM/Naster)