Gov’t to Distribute All Land Certificates by 2025 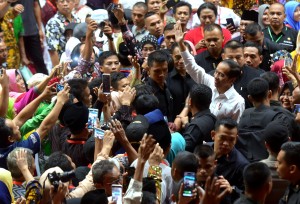 President Joko “Jokowi” Widodo aimed to complete the issuance of land certificates by 2025 and instructed the National Land Agency (BPN) to accelerate the issuance process.

“Next year, I expect 5 million (land certificates) can be issued. For the following years, I expect 7 million, 9 million, 12 million (can be issued) respectively. So, God willing, Insha Allah, the target will be achieved by 2025,” President Jokowi stated in his remarks during the distribution of 3,200 land certificates at Tri Dharma Sports Complex, PT Petrokimia Gresik, Gresik Regency, East Java, Thursday (20/6).

Previously, only 500,000 certificates were issued every year. That means it will take 160 years to finish issuing the remaining 80 million certificates,” the President said.

Therefore, President Jokowi has instructed Minister of Agrarian and Spatial Planning / Head of the BPN to complete the land certification target as stated.

“Earlier, the Minister had assured me that land certificate issuance in Gresik will be completed by 2024,” he said.

On the occasion, President Jokowi also reminded those who already have the certificate to put it in a plastic cover and make a photocopy of it so that if the certificate is lost, the copy of it will make the re-issuance process at the BPN easier.

The President also urged people to think carefully before using land certificates as collateral for bank loan. He suggested them to well calculate whether they can pay the installments to avoid the loss of certificates. (MAY/RAH/ES)