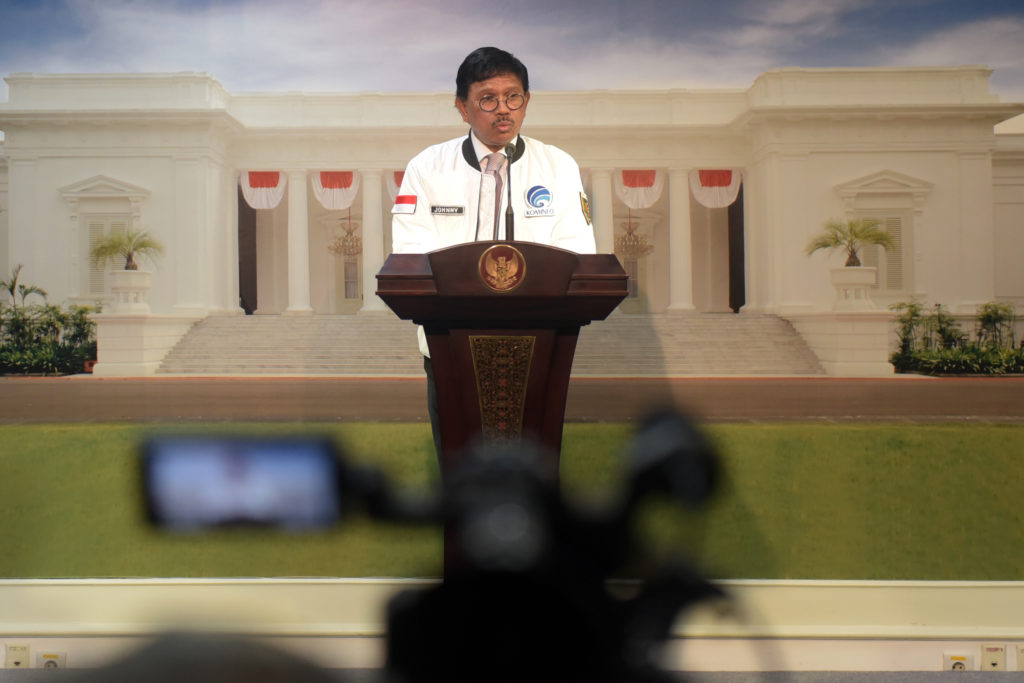 Minister of Communications and Informatics delivers a press statement after a limited meeting at the Presidential Office, Jakarta, Friday (28/2). (Photo by: Rahmat/PR)

The Government has announced plan to form an integrated data center, which will be called the national government data center.

“We will follow up this plan and we hope that the data center can be processed immediately so that it is ready to be used no later than 2023,” Minister of Communications and Informatics Johnny G. Plate said in his statement to the press after a limited meeting at the Presidential Office, Jakarta, Friday (28/2).

According to the Minister, there are several sensitive issues in regarding data centers and related to data traffic, be it at home or between countries.

“Specific data related to data owners, financial data, health data will be discussed further in coordination with Coordinating Minister for Economic Affairs,” the Minister said, adding that there are several issues particularly related to the location of the data in the country and the use of the initial computing methods.

Johnny went on to say that several regulations or legal umbrella that must be completed regarding data center investment will refer to the Electronic Information and Transactions (ITE) law, Government Regulation Number 71 of 2019, and the need for around 23 articles of more technical rules in the form of related Regulations of Minister of Communications and Informatics.

“We will finish drafting relevant regulations in one week and once the draft is completed, we will disseminate it before is officially enacted,” Johnny said.

The issuance of Ministerial Regulation, the Minister continued, is important because it regulates measures to accelerate investment decision making by business players and investors who want to make investment related to data centers in Indonesia.

The resulting Ministerial Regulation, he added, fulfills all interests, both data protection of data owners, data security, as well as data sovereignty on one side and on the other, business or investment sector that can be implemented well.

Furthermore, the Minister explained that the Ministerial Regulation aims to ensure that it is related to supervision and law enforcement and sanctions.

In the meantime, based on the President’s direction, the Minister continued, mechanism and rules in the Ministerial Regulation will refer to the best practice that has been globally applied.

The regulation itself, he added, will be in two types, a Ministerial Regulation to technically translate Government Regulation Number 71 of 2019 and a law to improve some regulations and it will be harmonized with the latest one.

The decision of the Government in this matter with the House of Representatives (DPR-R), continued the Minister, is related to Law on Personal Data Protection, which regulates two types of data, one that is general in nature and one that is specific in nature.

Data that is general in nature can move or flow on a limited basis, yet specific data needs to obtain approval from the data owner and is regulated in the law, the Minister said. (FID/EN)