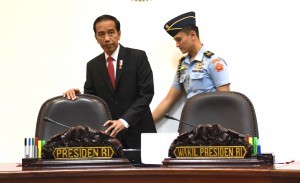 The Government continues to take measures to reduce social gap as an effort to promote equal development in all regions all across the country, President Joko Jokowi Widodo said during a limited cabinet meeting on the Plan to Establish Wakaf Bank at the Presidential Office, Jakarta, Wednesday (25/1).

I have repeatedly stressed the importance of asset re-distribution, widening access to capital, improving skills, as well as changing of methods in tackling poverty and reducing social gap, the President said.

In the meantime, to widen access to capital, the President added, the Government, along with the Financial Services Authority (OJK) and central bank Bank Indonesia (BI) will continue to take measures to reduce gap in access to gain capital, especially to reach micro, small, and medium enterprises (MSMEs) that so far have not really been served by bank credits.

According to the President, one of the measures to be made is the development of sharia financial institutions managed based on the wakaf (endowments) system. The President pointed out that potentials of wakaf di Indonesia is huge, be it immovable wakaf or movable wakaf, including wakaf in the form of money.

Regarding that matter, President Jokowi asked for views from the OJK, BI, and the Ministers about the idea to develop a sharia financial institution based on the wakaf system.  He added that the main purpose of the establishment of this institution is to empower economy of the people and is also expected to give significant impacts to the effort to boost national economy, especially in MSMEs.

The establishment of this wakaf-based sharia financial institution, the President affirmed, is also very important for the Government to tackle problems faced by the people and the nation, especially those related to poverty, unemployment, social gap, and equality in economic opportunities.