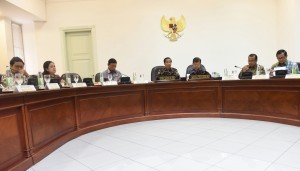 Cabinet Secretary Pramono Anung explained that the membership of 112 out of 233 international organizations that  Indonesia has joined is strategic and permanent. Therefore, the Government decided that the membership should be continued. Meanwhile, 46 memberships that are technical in nature will be maintained and 75 memberships needs to be evaluated, Pramono told the reporters after attending three limited meetings on Thursday (22/12), at the Presidental Office, Jakarta.

Previously, Minister of Foreign Affairs Retno Marsudi asserted that the Government must pay around Rp400 billion per year for Indonesias membership in 236 (including 3 more new memberships) international organizations.

The Minister explained that out of 236 organizations, only few memberships run by the Ministry of Foreign Affairs. Most of them are run by other ministries and technical institutions. Despite those fact, it is the Ministry of Foreign Affairs that pays for the memberships. Although the technical ministries/institutions are those which have the necessity, interests, and assessment of those memberships, during the payment, the money is deposited in Foreign Affairs Ministrys budget, Retno told the reporters after a limited meeting on Thursday (22/12), at the Presidential Office, Jakarta.

Regarding the evaluation, Retno explained that there was a discussion on coordination at ministerial level. However, the coordination will be carried out at the coordinating ministrys level, as the President has instructed in the limited meeting.

The Minister cannot mention how many membership that will be withdrawn because they still have to conduct an evaluation on that matter next week. (DNA/ES) (RAS/MMB/YM/Naster)