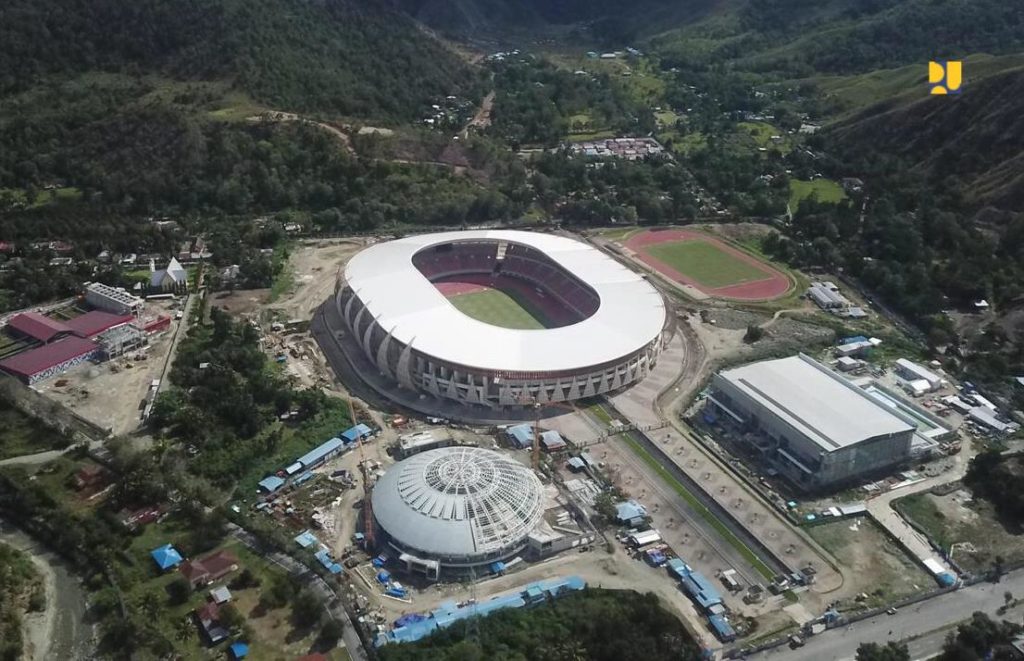 PON Venue in Papua. (Photo by: Ministry of Public Works and Public Housing)

The Indonesian Government through Ministry of Public Works and Public Housing will extend the construction work period for the 20th National Games (PON) in Papua Province, until early 2021.

The extended construction works cover venues for rowing, archery, roller skate, 5 tower apartments, as well as the arrangement of Kampung Harapan and Doyo Baru sports complex. Meanwhile, other construction works are scheduled for completion in 2020.

This decision was made following the postponement of the PON due to COVID-19. The PON was rescheduled from October 2020 to October 2021.

Previously, the Ministry through the Papua Regional Settlement Infrastructure Center (BPPW), Directorate General of Human Settlements was tasked to build 10 sports venues in support of the 20th PON in 2021.

The construction works which was carried out in Jayapura Regency are among other aquatic venues and Istora Papua Bangkit in the Kampung Harapan sports area in East Sentani District and the Cricket venue and Hockey field (indoor and outdoor) in the Doyo Baru sports complex in Waibu District, as well as Roller Skates, Archery, and Rowing in Jayapura City.

In addition to the sports arena, the Ministry also arranged Kampung Harapan, valued at Rp134.7 billion as a supporting area for the Istora and Aquatic venues. The arrangement only began at the end of January 2020 with 9.21% progress.

Also, the arrangement of Doyo Baru, valued at Rp64.9 billion as a supporting area for the Cricket venue and the Hockey Field (indoor and outdoor) only began at the end of December 2019 with  22.68% progress.

The Ministry through the Papua River Basin Center, Directorate General of Water Resources was also tasked to do a construction work to safeguard the Youtefa Bay Coast, where the rowing venue is. The construction, valued at Rp48.5 billion, is currently still in the preparation stage for physical work. It also tasked to built the Jayapura Regency drainage system with a value of Rp4.7 billion and 0.86% progress.

or the athlete’s dormitory and the officials, the Ministry through the Directorate General of Housing was also assigned to prepare 16 towers of flats with a total capacity of 2396 units. Of the 16 towers, 10 towers have been completed. In 2020, it has begun a construction work for1 tower which now has reached 6% progress. Meanwhile, 5 other towers will be built in early 2021. (BKP Kementerian PUPR/EN)