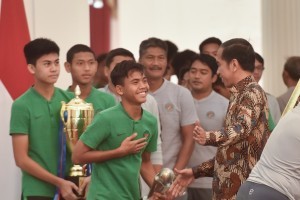 President Joko Jokowi Widodo has pledged to find a state-owned enterprise to become a foster father for the U-16 Indonesian football team to support their achievement.

“(The SoE) can provide budget for the U-16 team until they play at U-19 level and become a senior team in the future, President Jokowi said after receiving the U-16 football players, coaches, and officials at the Merdeka Palace, Jakarta, Thursday (4/10).

The President also expressed optimism that the U-16 team will earn more achievements in the future. “We have seen the U-16 team has become the champion at the ASEAN level, while at the Asian level the team beat Iran, held India to draw, although lost to Australia. I have seen that the team displayed a great spirit in those matches, Prsident Jokowi said, while expressing hope that the U-16 national team will continue to take part in world competitions to hone their skills and enrich their experience.

The President went on to say that the competitors of the team in U-16 level would be the competitors in the future U-19 level. Thus, according to the President, the Indonesian U-16 team stands a good chance to become a champion both in the ASEAN level and in the Asian level. “The important thing is to improve skills to be ready for any competition, the President said.