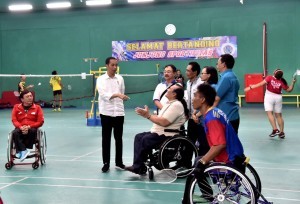 Upon his arrival at 04.20 p.m. Western Indonesian Time (WIB), the President headed to badminton court located at the third floor where para badminton athlete Supriadi was practicing with his colleagues.

Afterwards, President Jokowi, who was accompanied by Minister of State Secretary Pratikno and Governor of Central Java Ganjar Pranowo, moved to table tennis training room at the second floor.

I want to monitor the preparations of athletes to achieve success in the 2018Asian Para Games, which will soon begin. I also witnessed the preparations in badminton and table tennis which are expected to produce gold medals for Indonesia, the President told reporters after the visit.

President Jokowi went on to say that the Government will give the same bonuses to para athletes that perform well as those given to the 2018 Asian Games athletes. For the record, a gold medalist of the 2018 Asian Games received cash bonus amounting to Rp1.5 billion and was given the opportunity to become civil servant.

We give the same bonus, there is no difference (with the 2018 Asian Games), the President firmly said.

We want to see the athletes do their utmost in the training and we hope Indonesia can have the same achievement as (the Asian Games). The target set is 16 gold medals but we expect the athletes can exceed the target, the President concluded.