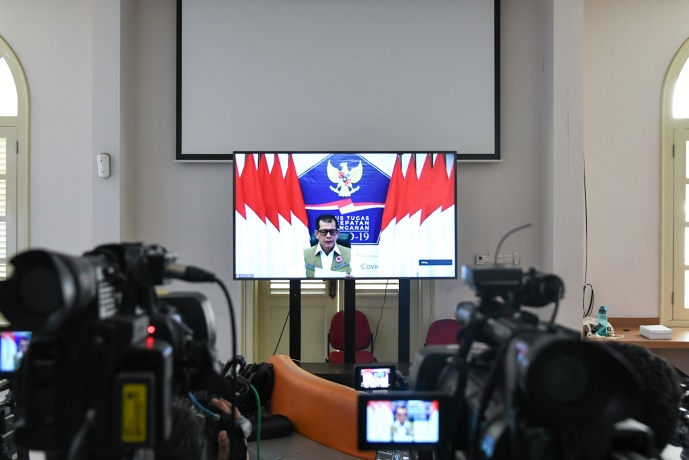 Head of the National Disaster Management Agency—who is also  Head of the Acceleration of  COVID-19 Mitigation Task Force— Doni Monardo stated the need for improvement in the implementation of Greater Jakarta Large-Scale Social Restrictions (PSBB).

“The problem lies in the upstream, there are still many people working in the office,” Doni said at a press conference after the limited meeting (20/4).

Measures, Doni continued,  need to be taken, be it in the form of warning, reprimand, or even penalty. It is expected that the regional task force should take clear measures to handle companies that still do not comply with the health protocols.

On the parameter of success in the implementation of PSBB, Doni stated, the graph is still experiencing an increase, but the number is far smaller than models created by mathematics experts.

“This must also be one of our spearheads as previously stated that WHO itself has given appreciation for the involvement of many parties in Indonesia including volunteers,” Head of the BNPB added.

In order to break the chain of COVID-19, Doni also encouraged the role of non-formal figures in educating the public on how dangerous the coronavirus is.

In order to break the chain of COVID-19, Doni also encouraged the role of non-formal figures in educating the public on how dangerous the coronavirus is.

“The youth group has very high mobility. If they do not understand this they can infect their siblings and parents,” he said, adding that the rate of severity will rise if one of the family members is vulnerable such as elderly or possesses any underlying medical conditions such as hypertension, heart disease, diabetes, cancer, asthma, bronchitis, and others.

Doni also said that the strength of combat in handling COVID-19 lies in psychological aspects, on how the people help and remind each other to avoid transmission. “This is the importance of information dissemination, the Head of Intelligence Agency stated that 63% of this mitigation effort lies on information, which means the media especially television and radio,” he said.

The Government, he said, invites all components, especially the media, to disseminate information on COVID-19 as often as possible.

On the shortage of PPE, Doni instructed the regional task force to plan on which hospital should be prioritized. He also greatly appreciated the help of the Indonesian Air Force for PPE distribution to all provinces in Indonesia.

“If there is a shortage of assistance, you can directly report to the task force. We have to protect doctors, so they have to get premium PPE,” Doni said.

On non-WHO standard PPE, Doni cannot forbid the PPE production by the people, instead, he gave his appreciation. “But, once again, we have to provide the WHO standard PPE for doctors and nurses (on the frontline),” he said.

Doni also stated that all the suspected patients who passed away will be buried with COVID-19 protocols. The Government will later update whether the passed away patients confirmed positive or negative for COVID-19.

To avoid overlap in the distribution of social assistance, Doni asked regional government officials, as well as village heads and hamlet/neighborhood association heads to data the recipients precisely.

On the reason for mass transportation still in operation, Doni said that the Government will limit the mode of transportation if more companies close their office. This is to avoid passenger buildup in terminals, stations, and bus stops.

Therefore, Doni invited the media or the employees to report which office has not complied with the PSBB policy.

“We can see COVID-19 data through covid19.go.id,  we can learn the COVID-19 spread in Jakarta, West Java, and other regions there. Another platform you can look into is inaRISK,” Doni concluded. (TGH/MAY/EN)