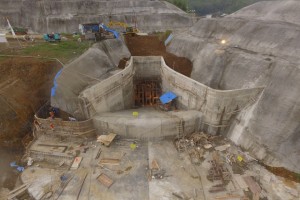 The Government is set to inaugurate three new dams and begin the construction of nine new dams this year.

“In 2019, as many as nine new dams (constructions) will be auctioned to meet the Government’s target,” Director General of Water Resources of Ministry of Public Works and Public Housing Hari Suprayogi said in Jakarta.

Sei Gong dam, which has a capacity of 11.8 million m3 and can irrigate an area of 246.8 Ha, will be a source of raw water with a capacity of 400 liters/second, while Sindangheula dam is a multifunctional dam that can irrigate an area of 1,000 hectare in Serang Regency and Serang City and is also expected to control floods in downstream areas and supplies raw water of 0.8 m3/second.

Meanwhile, Paselloreng dam (with capacity of 138 million m3) is ready to irrigate 7,000 hectares of land, supply raw water of 305 liters/second in Wajo regency, control floods from Gilireng River, function as a micro-hydro power plant with the capacity of of 2.5 MW, conserve water, become a freshwater fisheries area, and serve as a tourism site.