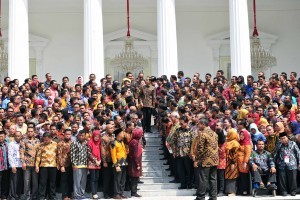 The Government will allocate Rp34 trillion from the State Budget for the Aspiring Family Program (PKH) in 2019, or to double it from Rp19 trillion in 2018, according to President Joko Jokowi Widodo.

Thus, your tasks will be tougher in guiding the households (KPM) to improve their conditions, President Jokowi told 600 participants of Aspiring Family Program (PKH)s Forces Jamboree at the State Palace, Jakarta, Thursday (13/12).

President Jokowi went on to say that the Government wants to prepare and improve human resources quality of the underprivileged group, one of which by improving their health. Do ensure that there is no case of stunting in their children, the President asked.

The Head of State also instructed them to insure that the budget is used to nourish mothers and children because nutrition is very important. Guide them to use the money to buy nutrient-dense foods, particularly for infants and pregnant women. Preparing the future generation be it for the next 20, 30, 40 years is really important, he added.

President Jokowi also asked the participants to educate the PKH recipients to manage the money given to them and not to spend it for consumptive use, but for productive use. If you have ability in trading, teach and guide them because it is the fastest way to improve their economy, the President said.

President Jokowi also shared a story when he met a vendor in East Jakarta whose capital increased from Rp200,000 to Rp500,000 after receiving the PKH and consequently, he received more income and profit. Creating opportunity is important but managing the money is more important, the President firmly said.

President Jokowi further said that that all participants can guide the PKH recipients because they also play a role in reducing poverty in the country. (RAH/JAY/ES)