Govt to Kick Off Manado Airport Expansion Project in September 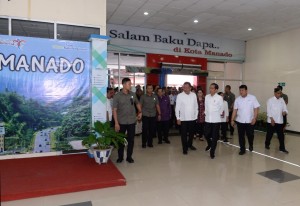 The Government has announced it will expand Sam Ratulangi international airport in Manado, the capital of North Sulawesi province.

The expansion project is scheduled to begin in September and end in October.

We will expand the airports terminal as well as the runaway, President Joko Jokowi Widodo told reporters during his working visit to the province, Thursday (4/7).

According to the President, international tourist arrivals to Manado have increased for years, causing a higher number of international flights to and from the airport.

President Jokowi also expressed hope that the expansion of the airport can further boost tourism industry in North Sulawesi province – dubbed as the rising star in the countrys tourism sector – and provide easier access for locals to better air transportation services.

President Jokowi also announced the Governments plans to develop and improve tourist destinations near the airport.

Located 13 kilometers northeast of Manado, Sam Ratulangi international airport is the second busiest airport in the island of Sulawesi. The airport is also designated as one of the 11 main entry ports to Indonesia by Ministry of Tourism and Culture and serves as the main gateway to Bunaken National Marine Park, North Sulawesis major tourist destination. (HIM/JAY/ES)