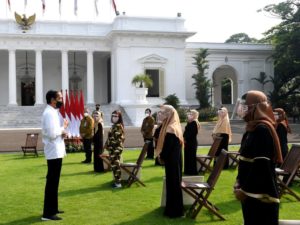 The Government has announced it will roll out the Cash Assistance Program for one million street vendors and small shop owners worth Rp1.2 million each as part of the national economic recovery program.

“This cash assistance is given to one million street vendors and small shop owners amounting to Rp1.2 million each through the Indonesian National Defense Forces (TNI) and the National Police (Polri). This will be implemented soon,” Coordinating Minister for Economic Affairs Airlangga Hartarto said in a press statement, Monday (6/9).

According to him, the street vendors and small shop owners who will receive assistance are those whose business locations are in the areas that implement public activity restrictions (PPKM) level 3 or level 4 and are not recipients of the Presidential Assistance for Productive Micro Enterprises (BPUM).

Airlangga also explained the realization of the Social Protection Program. The Pre-Employment Card budget in 2021 that has been realized reached Rp6.82 trillion and was distributed to 4.3 million recipients.

Meanwhile, for the Pre-Employment Card batch 19 as of 4 September 2021, as many as 3.9 million people have registered for the program. (FID/AIT/UN) (EST/EP)