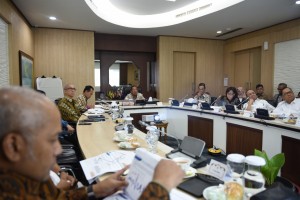 The Indonesian Government on Thursday (20/6) announced that it would lower price ceilings of domestic airfares of low-cost carrier for certain flight routes.

The policy is set to take effect next week.

The Governments decision was made following periodic evaluation on reduction in airfare price ceilings as set out in Regulation of Minister of Transportation Number 106 of 2019 effective from 18 May 2019.

We are finalizing a policy to impose price reduction on domestic airfares of low-cost carrier for certain flight routes. This policy will come into force next week, Coordinating Minister for the Economy Darmin Nasution told reporters on Thursday.

According to Darmin, the rising airfares since November 2018 has given rise to the 28% drop in the number of airline passengers  from January until April this year.

In addition, the Minister added, air transport inflation has also increased year-on-year (yoy) although inflation has lowered since May 2019 thanks to the governments policy on airfare price ceiling reduction.

It is recorded that since November 2018 air freight rates have been a constant contributor to inflation every month. Since we implemented the new price ceiling policy, air freight rate inflation in May was recorded at only 1.13 percent month-to-month (mtm), lower than that in the previous month at 2.27 percent mtm although annual inflation remains quite high at 27.85 percent (yoy), ” Darmin explained.

The Government has also announced that together with relevant parties such as air carriers, airport managers, and aviation fuel provider, it will lower costs associated with aviation operations. In addition, it is also preparing a fiscal incentive policy for airplane rental, maintenance and repair services, aircraft rental services from outside customs area, and import and delivery of aircraft and spare parts. (DNA/Coordinating Ministry for the Economy PR/ES)