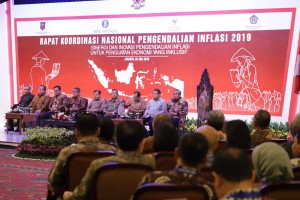 In a bid to maintain economic stability Indonesian Vice President Jusuf Kalla has ordered all regional heads to maintain inflation at a moderate level in their respective regions.

“Inflation is like blood pressure, if it’s too high or too low, we could faint,” Vice President Kalla said on his remarks at the National Coordination Meeting for Inflation Control in Jakarta, Thursday (25/7).

According to Kalla, if deflation occurs, entrepreneurs will suffer losses and their employee will be terminated. and at the same time, uncontrolled inflation will affect people’s purchasing power and inclusive economic growth.

“Inflation control is carried out by strengthening policy synergies, increasing supply availability, and maintaining a smooth distribution of food,” he said.

“Inflation until mid-2019 also remains under control within the target range of 3.5 ± 1 percent,” Perry said, adding that strong synergy between the Central Government, regional governments and Bank Indonesia is they key in maintaining the inflation.

Furthermore, Bank Indonesia, he added, will also continue to optimize the policy mix to direct inflation expectations on target and encouraging the momentum of economic growth at the same time.

“The policy includes the development of a number of food clusters in the region in an integrated manner, among others by facilitating these activities so that they are connected with technology and information systems,” Perry added.

Bank Indonesia also hopes that inflation remains low and under control within the target range of 3.0 ± 1 percent in 2020-2021, Perry added. (Depkom BI/ES)