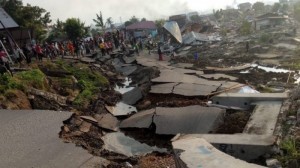 Debris of damaged houses and buildings following a 7.4-magnitude quake and tsunami in Palu, Central Sulawesi. (Photo by: IST)

In the wake of the earthquake and the tsunami that hit Central Sulawesi province on Friday (28/9), Ministry of Public Works and Public Housing will focus the emergency response in four measures, namely evacuating the victims, providing clean water and sanitation infrastructure and facilities, cleaning the city from debris, and tackling connectivity problems.

According to Minister of Public Works and Public Housing Basuki Hadimuljono, those measures began on Sunday (30/9) evening and are expected to be fully operational on Monday (1/10).

First, the Ministry will focus the evacuation process in worst-hit areas of Balaroa and Petobo, where dozens of people are estimated to remain buried under the rubble. “For that purpose, nine excavators will be dispatched to Petobo and five excavators to Balaroa,” Basuki said.

Third, the Government will mobilize three dump trucks and two excavators to clean the city. The Ministry – in collaboration with the City Government  will also gradually begin collecting the debris. “I have ordered related officials to complete the task in no later than two weeks,” the Minister said.

Fourth, the Government will also resolve connectivity issues to ensure the smooth flow of logistics from Makassar, Gorontalo, and Poso to Palu. The logistics are needed for among others repairing two damaged bridges in Towalen and Toyobo and cleaning up landslides in some points that are deemed vulnerable such as in the Kebon Kopi area, which links Palu with Parigi-Poso and Palu with Gorontalo.

The Minister also reminded the personnel tasked with handling post-quake and tsunami emergency response in Palu-Donggala to work with full sincerity and empathy. “We must be able to feel what the Palu residents feel,” he said, adding that every step in the handling process, both self-managed and contractual handling, must comply with administrative aspects and the Financial and Development Supervisory Agencys (BPKP) guidelines. (BKP Ministry of Public Works and Public Housing/ES) (MUR/EP/YM/Naster).