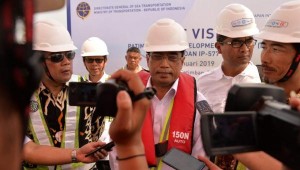 Patimban port in Subang, West Java is projected to be operational by mid-2020, Minister of Transportation Budi Karya Sumadi has said.

“By April of next year, we hope we can use its car terminal. Therefore, I will continue to coordinate with (all related parties), so (the whole construction) can be completed by the end of next year,” the Minister said at the Patimban port project site in Subang regency, West Java, Sunday (23/6).

The Minister also expressed hope that Ministry of Public Works and Public Housing can complete road construction from and to the port by then.

The progress of the port construction, Budi added, is currently 29%, while progress construction of the car terminal has already reached 35%.

For the record, Patimban Port Car Terminal is expected to reduce traffic congestion, especially due to export and import vehicles at Tanjung Priok sea port in North Jakarta. So far, heavy vehicles, including export and import vehicles transporters, have contributed to the congestion, especially in the section between the neighboring Bekasi and Tanjung Priok in Jakarta.

The Patimban port terminal car is expected to have a capacity of around 250 thousand to 300 thousand vehicles per year.

According to him, the construction is carried out in 3 stages. In the first stage, Patimban Port is planned to serve 3.5 million containers (TEUs) and 600,000 motorized vehicles (CBU), while in the second and third stages, service capacity will be increased to 5.5 million TEUs and 7.5 million TEUs, respectively.

In general, Patimban Port will serve containers and motorized vehicle types which are transported using large-sized vessels, he added.

“In the future, the Patimban port will also be supported by a backup area to support logistics efficiency from and to the port covering 356 hectares,” Agus said.

The Government has also announced that the operation of Patimban port is expected to streamline the cost of exporting Indonesian products abroad, one of which is automotive products. (Ministry of Transportation PR/ES)