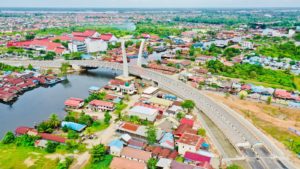 “We are currently coordinating with Ministry of Public Works and Public Housing (regarding the bridge),” Head of the Secretariat of President Heru Budi Hartono said on Sunday (26/09).

Heru further said that the bridge could be operated with limited operational trials until the inauguration. “Only two-wheelers and passenger cars are allowed to cross the bridge,” Heru added.

In the meantime, Minister of Public Works and Public Housing Basuki Hadimuljono stated that the Ministry is ready to operate the bridge and his officials will coordinate with South Kalimantan provincial government and South Kalimantan regional police regarding the bridge’s trial readiness.

Basuki also urged the people to obey traffic rules and regulations by not parking or stopping on the bridge.

“We are worried since the bridge is new; thus, the people have a desire to stop to see (the view from) the bridge or take pictures,” Basuki said, adding that the people must also maintain cleanliness and order in the bridge area.

For the record, Sei Alalak Bridge, which is located in City of Banjarmasin, has completed the entire construction process on Friday (24/09). The bridge was constructed to replace a 30-years-old bridge of Kayu Tangi 1 and is expected to boost the local economy around the location. (BPMI SETPRES/UN) (GWH/LW)