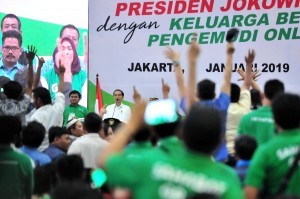 President Joko Jokowi Widodo on Saturday (12/1) said that recent development of new innovation must be accompanied by reforms of regulations.

Unfortunately, we have to admit that these innovations are faster to emerge than the regulations themselves the President said during a Gathering with Online Drivers at JI Expo, Kemayoran, Jakarta.

According to the President, this situation does not only occur in Indonesia. It happens in all countries and not only (occurred) in online taxis, he said, adding that to protect all parties, the Government wants a clear legal umbrella on online transportations.

On the occasion, President Jokowi also reminded all online drivers to refrain from using mobile phones while driving. Be careful because you have a family. Don’t let carelessness leads to accidents, the President told the drivers.

President Jokowi also admitted to have seen some drivers talking on their phone while carrying passengers. I want you all to be not involved in any accident. We all pray that everyone will go home safely, the President concluded. (RAH/EN)