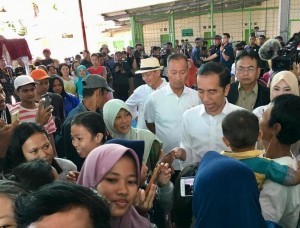 President Jokowi answers questions from the journalists during his visit to several tsunami-affected areas in Pandeglang, Banten, Sunday (24/12). Photo by: Presidential Secretariat.

President Joko Jokowi Widodo said that the tsunami hit the Sunda Strait several days ago had unusual pattern so that the Meteorology, Climatology, and Geophysics Agency (BMKG) could not provide tsunami warning to the people.

The President also said that a tsunami warning is usually generated from a quick analysis of the quake occurred before tsunami. However, the President added, there was no quake prior to the last Sunda Strait tsunami.

“I have instructed the BMKG to purchase early warning systems that can provide early warning to the people,” President Jokowi told reporters during his visit to several tsunami-affected areas in Pandeglang, Banten, Sunday (24/12).

Regarding the large number of victims caused by the tsunami, President Jokowi said that he has instructed state apparatus to add disaster education into national curriculum to provide knowledge on disaster to students.

In the meantime, Center for Volcanology and Geological Disaster Mitigation (PVMBG) of the Ministry of Energy and Mineral Resources (ESDM) in its press release on Monday (22/12) stated that the tsunami was most likely triggered by flank collapse of Mount Anak Krakatau, particularly in the south and southwest sectors.

“Additional data and further analysis are needed to find out if there are other factors that play a role (in the tsunami),” the press release reads, adding that the last tsunami is a rare case and it is still very difficult to estimate the partial collapse of a volcano.

For this reason, monitoring of tsunamis in the middle of the Sunda Strait with the installation of monitoring equipment (sea level station monitoring facility in the surrounding islands of Mount Anak Krakatau and/or Buoy) and visual monitoring with remote sensing are very urgent to provide, according to PVMBG.

PVMBG further said that the eruption of Mount Anak Krakatau is still ongoing. For this reason, the PVMBG appealed to the people on the west coast of Banten and the southern coast of Lampung to remain vigilant, and for the time being they shall not travel to areas affected by the tsunami. (BPMI Setpres/Humas Kementerian ESDM/ES)