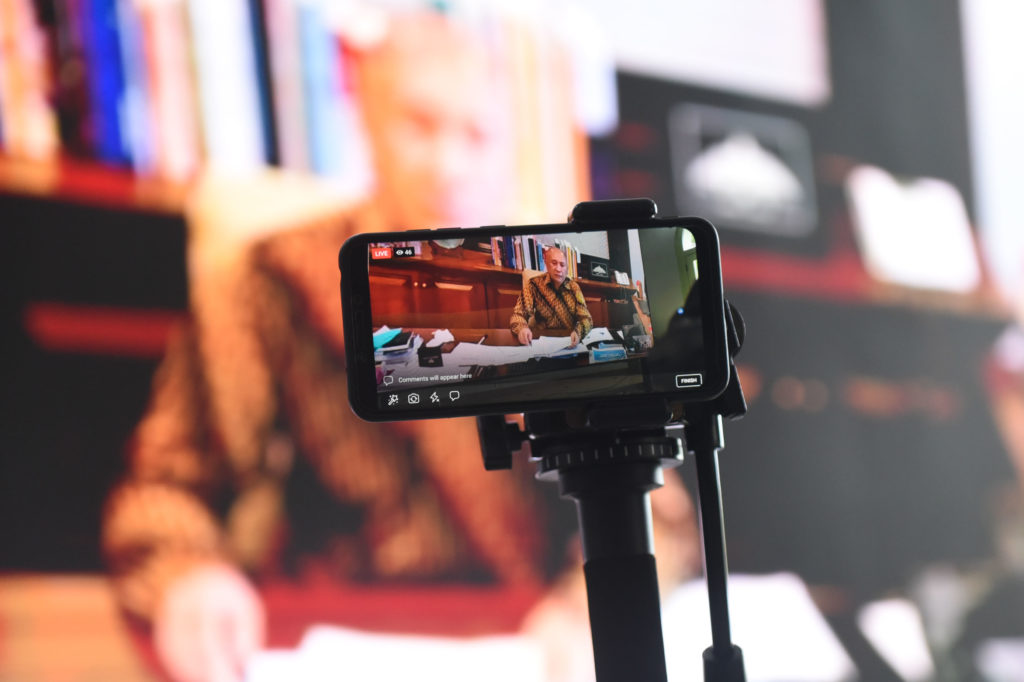 Minister of Cooperatives and Small and Medium Enterprises Teten Masduki delivers his statement after a Limited Cabinet Meeting through a video conference, Wednesday (15/4). (Photo by: Public Relations / Rahmat)

“As many as 99 percent of business actors in the country are engaged in the MSMEs sector and the majority of such enterprises are micro-level businesses. This sector has contributed 60 percent to the gross domestic product (GDP) and employed 97 percent of the people so that President Jokowi requested that the MSMEs loan restructuring program should be expanded,” Minister of Cooperatives and Small and Medium Enterprises Teten Masduki said after a Limited Cabinet Meeting through video conference, Wednesday (15/4).

The Minister went on to say that the program should include interest installments relief that will be provided to micro-credit program recipients and loans recipients under Rp10 million through rural banks (Bank Perkreditan Rakyat), Islamic microcredit banks (Bank Perkreditan Rakyat Syariah), savings and loan cooperatives, Islamic microfinance institution (Bait Maal Wat Tamwil), and others.

According to Teten, the President also requested that small and medium level businesses should be included in the list of direct cash assistance program (BLT) recipients and should arrange a new loan for MSMEs that are experiencing payment difficulties.

“The tax stimulus package will be valid for six months, meaning that the tax is zeroed out. The Government also provides the purchasing power stimulus for MSMEs products,” Teten said.

The Minister further said that President Jokowi has agreed to integrate Staple-Food Card in Social Security Program with traditional stalls so that they could stay afloat and have an income as a staple-food supplier.

“To date, social assistance is pouring out to the public so that it can increase people’s purchasing power. We hope that both food stalls and traditional stalls can receive benefit from the program,” Teten said.

On that occasion, the Minister said that Ministry of Cooperatives and Small and Medium Enterprises, Ministry of Finance, Coordinating Ministry of Economic Affairs, and the Financial Services Authority (OJK) will coordinate to set out the details of the allocation  for loan restructuring, additional new financing, as well as the budget for the addition of extended social security program for MSMEs.

“A total of Rp70 million credit assistance for MSMEs. We will evaluate which affected MSMEs deserve to join the program,” Teten added.

In the meantime, the Minister also said that the Public Service Agency (BLU) under Ministry of Finance, the Government Investment Center (PIP), PT Bahana Artha Ventura, Revolving Fund Management Agency (LPDB), State-owned financing company PT Permodalan Nasional Madani (PNM), as well as microcredit banks and cooperatives will be relaxing micro and ultra-micro business loans under Rp10 million. In addition, the implementation will be discussed with Ministry of Finance.

“The cooperatives that we support with relaxation are only healthy cooperatives without any problems within. I think it was emphasized by Minister of Finance,” the Minister said.

The Government will also involve banking sector to distribute Smallholder Business Credit (KUR) through various channels so in the near future the program can reach wider microsectors,for example, through savings and loan cooperatives, rural banks (BPR), financial technology, as well as the Government Investment Center (PIP).

“The Government will have further discussion to make the process easier. For now, we will speed up the implementation in accordance with the President’s instruction,” the Minister said at the end of his statement. (MAY / EN)