Govt to Purchase Rubber from Farmers 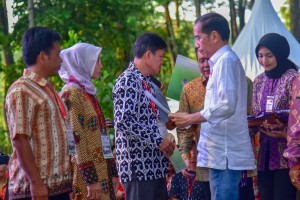 President Joko Jokowi Widodo has instructed Minister of Public Works and Public Housing Basuki Hadimuljono to buy rubber from the peoples plantation as the price of the rubber drops significantly in global market.

“I have instructed Minister of Public Works and Public Housing to start buying rubber from cooperatives or farmers from the beginning of December,” President Jokowi said in his remarks during the distribution of social forestry decree in Palembang, South Sumatra, Sunday (25/11).

The President added that the rubber purchased by the Government from the farmers would be used as a mixture for paving roads and the purchasing price will be approximately Rp7,500-Rp.8,000 or even higher.

He went on to say that Indonesia could not control the rubber price since it depends on international trade.

On that occasion, President Jokowi also delivered 60 decrees of social forestry to 60 forestry groups from 10 regencies in South Sumatra Province with a total area of ??56,000 hectares.

“Please carefully keep (the decree). It provides legal basis for the farmers as it stipulates 35-year concession,” President Jokowi said.

The President also reminded the holders of the decree to cultivate the land by planting coffee or other productive plants.