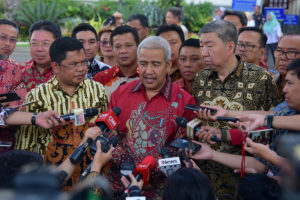 “To meet the target (of building new houses) until the end of the year, we actually need nearly 130, 0000 houses units within the FLPP scheme. However, Ministry of Public Work and Public Housing has proposed to Ministry of Finance an additional budget of Rp8.6 trillion, equal to 80,000 houses,” REI Chairman Soelaeman Soemawinata said after meeting with President Joko “Jokowi” Widodo at the Merdeka Palace, Jakarta, Monday (16/9).

Soelaeman added that the additional budget of Rp8.6 trillion would be disbursed next week or a maximum of next two weeks is sufficient until November. “This is indeed a good signal for consumers throughout Indonesia who want to own a house through the mortgage loans (KPR),” he said.

Soelaeman went on to say that the REI has built subsidized houses amounting to 400 thousand units. As for  Himperra and APERSI, they have built 60,000 houses and 150,000 houses respectively.

In total, the three associations contribute almost 65 percent of the Government’s one million housing program, he added.

In the meantime, regarding proposals submitted by the associations during the meeting, according to Soelaeman, the three associations have expressed hopes to immediately escape the crisis and for this reason, they propose several things including taxation policy.

“We hope that the Government will not issue a new policy in the taxation sector. So, no progressive tax, no retained earnings tax, and the income tax (PPH) remains final,” said Soelaeman, adding that the condition  will create a more favorable condition for property industry and developers as there are no changes in strategy and policy of the company.

Soelaeman further said that the issue of licensing becomes the President’s concern as he hopes for a fast growth of property industry, particularly developers.

He also expressed hope that “psychological obstacles” including policies that may change the developer’s strategy will be eliminated, adding that the current interest rate is actually lower than that in 1994 that saw a booming period in property industry.   (MAY/AGG/ES)