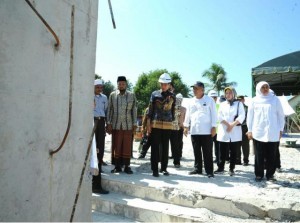 President Joko Jokowi Widodo on Thursday (15/12) laid the cornerstone for the construction of the mosque. President Jokowi previously visited the mosque on Friday (9/12).

Regarding the re-construction of buildings damaged by the quake, President Jokowi pledged that the Government would prioritize to re-build public facilities.

For the peoples buildings, we have also given assistance. Including for those suffering from minor, medium, and severe damages. We just have to wait for the decree from regents or governors. But Ive instructed that starting next week, everything has to be clean and the construction has to begin soon, especially schools, the President said.

Before laying the cornerstone for the construction of At-Taqarrub Great Mosque, President Jokowi also visited Peulandok Tunong Public Primary School in Gampong Peulandok Tunong, Trienggadeng Sub-district, Pidie Jaya Regency. The school building is now used as an evacuation center. In the school, the President also met with residents taking shelters there and had a limited meeting with a number of ministers.

(The meeting was held) to accelerate processes on the ground in the form of construction, giving assistance for buildings suffering from medium and minor damages and the distribution of logistics so that everything can be well-organized, the President said.