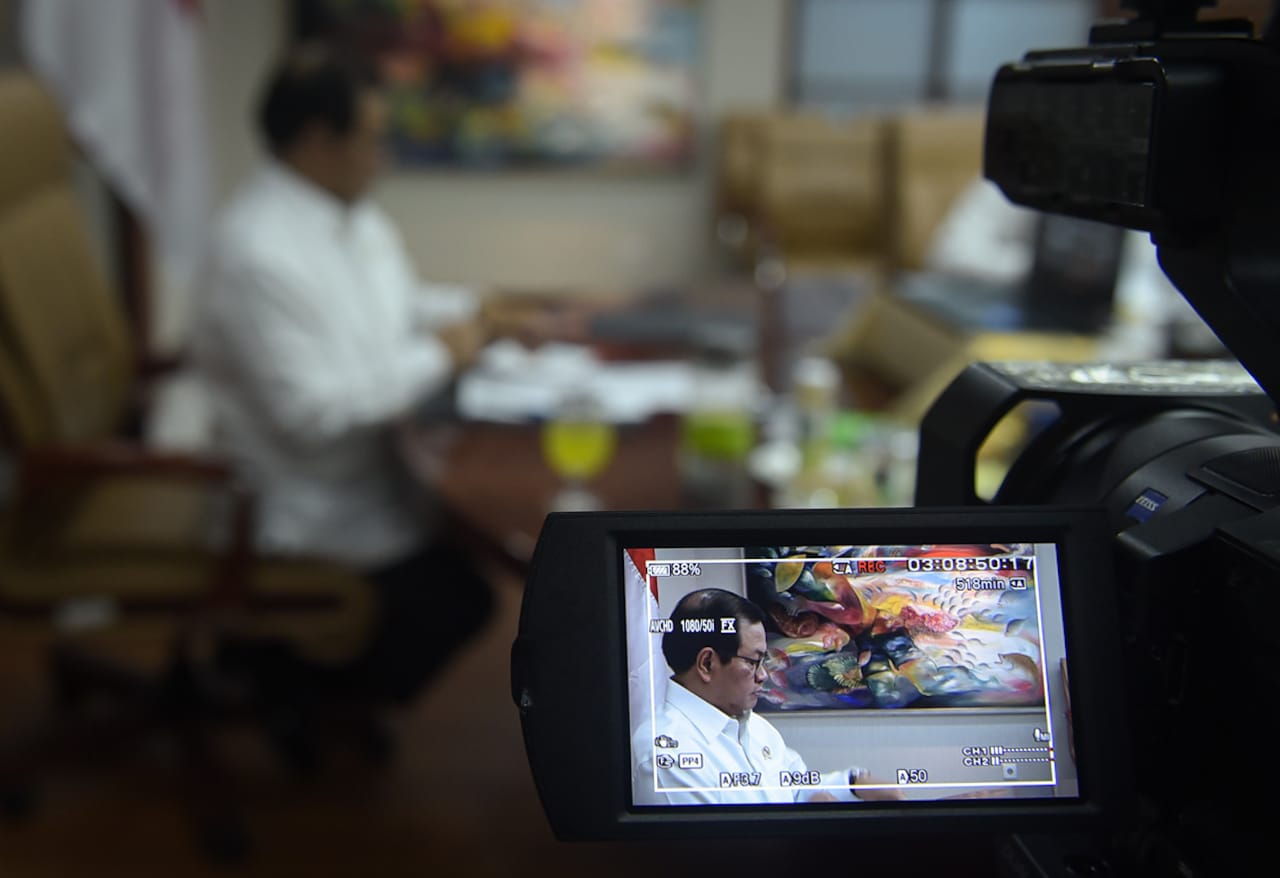 Cabinet Secretary Pramono Anung attends a Limited Meeting through a video conferencing on monetary and fiscal policy to deal with the economic impact of the coronavirus pandemic, at the Merdeka Palace, Jakarta, Friday (20/3). (Photo by: PR / Agung).

In a bid to tackle the economic impact of the coronavirus pandemic, President Joko “Jokowi” Widodo has instructed all Cabinet ministers, heads of institutions, and regional governments to refocus and reallocate the State Budget and regional budgets.

“First, cut non-priority budget posts, including for official business trips, working meetings, and non-operational purchases of goods,” President Jokowi said in his remarks at a Limited Meeting through a video conferencing on monetary and fiscal policy to deal with the economic impact of the coronavirus pandemic, at the Merdeka Palace, Jakarta, Friday (20/3).

The President has also ordered his ministers to pay attention to the people’s purchasing power.

He added that the State Budget and regional budgets should be reallocated to the three matters, including improving healthcare to mitigate the impacts of covid-19 outbreak, providing a social safety net, and strengthening people’s purchasing power.

The President has also instructed Minister of Village, Development of Disadvantaged Regions and Transmigration, Minister of Home Affairs, all regional heads, and village heads to reallocate village funds for the people affected by the covid-19 outbreak.

The Head of State also told his Ministers to prioritize labor-intensive public work projects at all ministries and institutions. “A number of ministries have started the program. It needs to be expanded in more ministries,” he said.

President Jokowi also stressed the importance of budget reallocation to focus on economic incentives for business actors, as well as small and medium businesses and the informal sector, adding that ensuring adequate liquidity in the banking industry and comprehensively monitoring the financial system and risk mitigation are also important.

The President has ordered BI to maintain stability of Rupiah exchange rate, to keep inflation under control, and to speed up the enactment of regulations on the use of rupiah accounts in the country.

In the banking industry, the President ordered the OJK to prioritize economic stimuli packages that provide ease to affected communities, including micro, small and medium enterprises (MSMEs) players and those in the informal sector.

“The economic stimuli is expected to improve production activities and to prevent the number of layoffs from increasing even further,” the President said.

“Another stimulus package on the relaxation of loans disbursement and restructuring is already good. I want this stimulus package to be evaluated periodically in order to see the demand on the ground,” the President added.

Furthermore, President Jokowi said that the distribution of People’s Business Credit (KUR) should be intensified even more and implemented immediately.