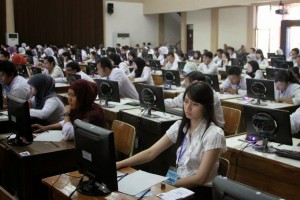 The Government is scheduled to begin civil servant selection in October this year, the National Civil Service Agency (BKN) has announced.

Bima revealed a number of obstacles experienced by last year’s applicants, including population database that was not updated that made it difficult for applicants to update their identity card (KTP) and Family Card (KK) at the regional and central Population and Civil Registration Office (Dukcapil), a number of applicants’ diplomas certificates that do not meet the required education qualifications, the identity card uploaded by the applicant that is not clear enough / does not correspond the original version, and a number of supporting documents attached that are not complete.

Those problems made them fail to meet administrative requirements, Bima said.

For the civil servants selection this year, Bima added, 108 locations across Indonesia will be prepared to hold selection process, which will be equipped with facilities provided by the BKN and in collaboration with a number of central and regional agencies.

“This number is certainly not enough for the simultaneous selection process; therefore the Government is currently preparing several other options,” Bima said. (EN / PR of BKN / ES)