Govt to Reduce Underdeveloped Villages to 9,000 This Year 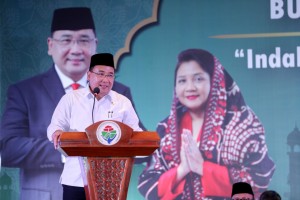 After having successfully alleviated 5,000 underdeveloped villages and lifted several thousand villages from developing to independence status during the period of 2014-2019, Minister of Village, Development of Disadvantaged Regions and Transmigration Eko Putro Sandjojo expressed his optimism that the number of underdeveloped villages will reduce to 9,000 villages by the end of this year.

I believe the number of underdeveloped villages will reduce to 8,000 – 9,000 villages by the end of 2019, Eko said in an iftar dinner with the officials and staffs of the Ministry as well as a number of orphans, at the Ministrys Balai Makarti Muktitama Building, Jakarta, Tuesday (21/5).

The Minister said that the statistics show that the Ministry has exceeded targets set in the 2015-2019 National Medium-Term Development Plan (RPJMN), namely alleviating 5,000 underdeveloped villages and developing villages into independent villages.

We have exceeded the target set in the RPJMN, but we have still many tasks to be completed. The Ministry will focus on alleviating all underdeveloped villages in Indonesia, Eko said.

The Minister went on to say that this favorable outcome is the result of hard work of all related parties which ensured Village Fund program and other ministerial programs can be well-implemented. He expressed belief that Village Fund program has a significant contribution to the Ministrys success in exceeding the target, and also to the development of villages in Indonesia.

Many developments were carried out massively in all villages since the implementation of Village Fund program, Eko said adding that the Fund also played a role in reducing poverty and rate of child stunting.

The Minister also expressed hope that the regional governments at village level can prioritize the Village Fund to be used for the villages economic and community empowerment this year so it will improve the economy and community in the villages. (Ministry of Village, Development of Disadvantaged Regions and Transmigration PR /ES)