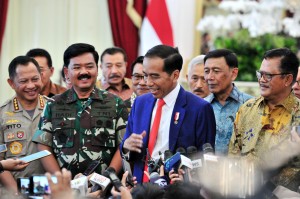 The Indonesian Government through Minister of Law and Human Rights and Commander of the Indonesian National Defense Forces (TNI) will conduct restructuring of the TNI.

The restructuring is carried out in order to give room for approximately 60 new positions for high-ranking officers to be filled from those who now have the rank of colonel.

On that occasion, President Jokowi also said that the TNI and Polri must respond quickly to the 4.0 Industrial Revolution.

Maybe by intensifying research for our defense equipment, he said, citing example from other countries that have used virtual reality, Artificial Intelligence, and 3D printing in their military development. (FID/JAY/ES)