Govt to Speed Up Poverty Alleviation 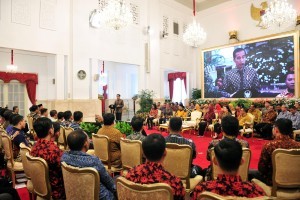 The Indonesian Government continues programs to speed up poverty alleviation, one of which is the Family Hope Program (PKH) aimed at increasing quality of human resources, President Joko Jokowi Widodo said at the Opening of the PKH Jamboree, at State Palace, Jakarta, Thursday (12/13)

The governments data shows that poverty rate has dropped from 11.2 percent in 2014 to 9.8 percent in 2018. However, President Jokowi considered the figure is still high and needs further efforts to reduce it.

In addition, President Jokowi continued, social assistance index may rise twice or three times. The amount of assistance will also rise in which each family will get Rp 550,000/family per year, while for PKH participants, they will get Rp 1,000,000/ family/year, he added.

Moreover, there are additional assistances for family with certain condition, the President added.

With these measures, the Government hopes to reduce poverty faster, the President added.

President Jokowi also reminded that the success of the program is the responsibility of the Government as well as the PKHs companions. Together we can eliminate poverty from the country, the President said. (RAH/JAY/ES)