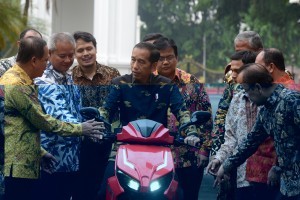 President Joko Jokowi Widodo has said that the national electric motorcycle namely Garansindo Electric Scooter ITS (Gesits) has been undergoing trials for quite some time.

In speed test, for example, it has been tested from Jakarta to Bali and showed no problems, the President added.

I tried it myself and there is no exhaust sound. The machine is also smooth and environmentally friendly, President Jokowi said after testing the Gesits motorcycle at Presidential Palace yard, Jakarta, Wednesday (7/11).

According to the President, the motorcycle will soon be mass-produced with approximately 60,000 units a year, or equals to 5,000 units per month and the number may increase, depending on market demands.

This electric motorcycle is 100% Indonesian brand, the President said, adding that although it is local brand, he ensured the Government will not provide marketing protection for the Gesits and will let consumers make their own decision instead.

We cannot give protection because it is not good for business environment. As long as the price is competitive and consume less fuel, it will be welcomed by the market, said President Jokowi.

The President also maintained that the Gesits should be tested first in the local market at competitive prices before it is produced for export market and stated he will purchase 100 units once it is launched.

Earlier on the occasion, Minister of Research, Technology and Higher Education M. Nasir said in his report that the Gesits electric motorcycle had reached the industrial stage.  The mass production will start in January 2019, he said. (FID/OJI/ES)