Gov’t to Take Quick Response to Spike in COVID-19 Cases Outside Java, Bali 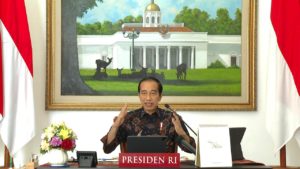 According to the President, there are three measures that are important to be taken immediately as they are important factors in decreasing COVID-19 cases in the islands of Java and Bali.

The President stated that the first measure is to limit public mobility.

“If the number of cases has soared that high, public mobility must be reduced. The first is the most important. All governors must know. Commanders of military regions, chiefs of regional police, everyone must know. Mobility of people must be slowed down for at least two weeks,” he said.

The President also ordered Commander of the TNI to intensify testing and tracing so that those who have had close contact with COVID-19 patients can be found and isolated immediately and a spike in COVID-19 cases can be prevented.

Furthermore, the President ordered that COVID-19 patients be immediately taken to centralized isolation facilities; thus, he ordered governors, mayors, and regents to prepare isolation centers in their respective region by utilizing public facilities, such as sports centers, multipurpose halls, and schools.

“I order Minister of Public Works and Public Housing to also assist (regional governments) in preparing isolation centers, especially in the regions that I have mentioned, which must be given immediate response based on the number of cases. Do involve the Indonesian Medical Association, the main gate of patient treatment. In Java island, (treatment) can be done through telemedicine, but if it cannot be used, (treatment) can be done through phone calls to reduce the mortality rate,” he said.

Aside from the three measures, the President also stated that vaccination speed is also the key to COVID-19 management; hence, he appealed to everyone to support the national COVID-19 vaccination program and ordered regional heads to immediately vaccinate their people as soon as they receive vaccine supplies.

“Do not let vaccination stop even for a day or two. Immediately inject them to the people. When it is out of stock, ask for more to the Central (Government). Do not store vaccines for too long, be it in health offices, hospitals, or community health centers. Order them to immediately inject all (of the vaccines) because this speed will bring protection to our people. I will follow the update of the number of daily cases,” he remarked. (Bureau of Press, Media, and Information of Presidential Secretariat/UN) (DH/EP)