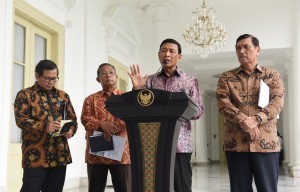 The Government has voiced its concern over the development of communication in social media which is replete with false, misleading, and hatred news. “False news is now widely spread. Indeed, freedom of speech is permissible. Freedom is a right in a democracy. However, everyone is obliged to abide by the laws and regulations,” Coordinating Minister for Political, Legal, and Security Affairs Wiranto told reporters after a Plenary Cabinet Meeting at the Presidential Palace in Bogor, West Java, on Wednesday (4/1).

Wiranto reminded that social media should not be used for negative things. He mentioned that the circumstances getting worse both attacking individuals, other community groups, and state policies.

Therefore, Wiranto further explained, there is a plan to implement preventive measures, so that freedom of the media, especially social media can be organized well and conducted in an ethical manner, with dignity, and is not detrimental to our national interests. “Those which are clearly in violation of the law will be dealt with firmly. The Police or law enforcement officers have been instructed to implement tough measures without compromise,” the Coordinating Minister Wiranto said.

Previously, the Coordinating Minister said that the Government will ask the House of Representatives (DPR RI) to finalize the discussion on the revision of Counter-Terrorism Law. Based on the observation of the strategic condition at the global, regional, and national levels, terrorism threat is considered very urgent to deal with. “Terror attacks have now become a world trend and we all agree to deal with it together. There is no single country that disagree that terrorism is facing countries in the world, including Indonesia,” Wiranto said.

Therefore, according to Wiranto, considering terrorism knows no laws, national boundaries, the Government has agreed to deal with it in a measurable way because it must be based on a law. “To this end, it is our hope that the revised Counter-Terrorism Law be passed,” Wiranto said.

When it comes to defending the country, according to Wiranto, the Government feels the need to reinvigorate the spirit to defend the country. The spirit of defending this country is not only borne by the security forces, the Indonesian National Police (Polri) and the Indonesian National Defence Forces (TNI), but also must be performed by all citizens of Indonesia. “It is mandated by the Constitution. Therefore, it is necessary to immediately set up a forum to preserve the country’s spirit to all Indonesian citizens,”Wiranto said.

However, Wiranto asserted that no new entity will be formed, but this task will be given to the National Security Council (Wantanas), which is a unit for preparing the draft proposed to the President. “Now, its duty has swicthed to deal with matters relating to rebuild the spirit of defending the country which is an urgent need,” Wiranto affirmed.

In addition to defending the country, according to Wiranto, the Government has also set up a working unit to inculcate the ideology of Pancasila (State Ideology). “So, all at once, on one hand, Pancasila is re-established through a working unit formed by the Government and on the other hand, we continue to instill defending the country to all Indonesian citizens to become a new force,” Wiranto said.

The Coordinating Minister added that the President also agreed to the establishment of the National Council for Harmony considering Indonesia has a history and every tribe in Indonesia has always resolved the problems amicably. According to Wiranto, the Council is as part of efforts to change the position of the Truth and Reconciliation Commission (KKR) that was not approved by the Constitutional Court. “Now, we will form the National Council for Harmony, but not necessarily to revive the KKR.We revive a philosophy of our nation to resolve the problems amicably,”Wiranto said. (FID/ES)(MUR/MMB/YM/Naster).